I apologize that this week's cartoon touches only tangentially on LGBT issues, but I couldn't possibly ignore the hot mess of last week's CNBC "debate" among ten of the baker's dozen Republican candidates for president. In case you missed it, Ted Cruz responded to a serious question about his signature issue, raising the federal debt ceiling, by attacking the hapless moderators for asking frivolous questions.

As a result, Cruz was declared the winner of the debate between the candidates and the press. 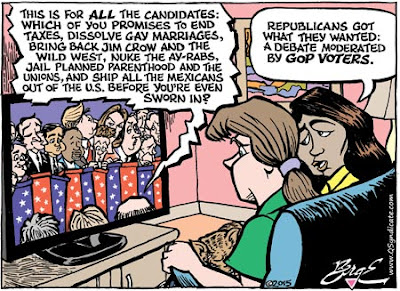 And now, flush with their victory over those raving socialists at CNBC, the Republican candidates are demanding to have only card-carrying Republican partisans ask them questions. As Cruz told Las Vegas AM radio host Heidi Harris:


"I think it's crazy that we have Republican primary debates moderated by people who would never in a million years vote in a Republican primary. It's not helpful, and it is an example of the media's leftwing agenda."

Let's leave out for a moment that most mainstream journalists consider it a violation of journalistic ethics to endorse a candidate publicly by telling everyone how they vote. To be perfectly honest, it doesn't matter if the Republican debates are moderated by Sean Hannity or John Fugelsang: there are too many candidates up on the stage for any debate format to work. I get more insight into these candidates when one of them shows up on Late Night with Stephen Colbert.

The CNBC format, furthermore, only confirms my long-standing observation that having multiple moderators is a huge mistake. The combination of so many candidates and so many moderators makes it that much easier for a candidate to get away with flat-out lying or completely ignoring a question from White House reporter Brock Brockman, because the next moderator isn't going to follow up on Brock Brockman's question, and when it gets around to Brock Brockman's turn to ask another question, he's going to address it to one of the other candidates.

And maybe we'll have the moderators walk off the set after 20 minutes of whiny, unfactual non-responses and leave the candidates to fill the remaining air time on their own.
Posted by Paul Berge at 7:58 AM