This is going to be a very random edition of Scatterback Saturday. Former Senator Fred Thompson (R-TN) passed away last weekend, so I'll start with this caricature of him from his short-lived 2007 presidential campaign.

Originally a Tennessee lawyer, Thompson first made his mark on the national stage as the 30-year-old staff lawyer for Republicans on the Senate committee investigating the Watergate break-in. He was the one who asked Alexander Butterfield whether the Nixon White House had a secret taping system. The answer led ultimately to Nixon's resignation, while the question led to Thompson's career in movies and television.

Thompson played up his folksy, laid-back persona in his acting career as well has his political one -- so well that people thought he had given up his presidential campaign months before he actually got around to announcing his withdrawal. He went on to pitch reverse mortgages to senior citizens in television commercials. 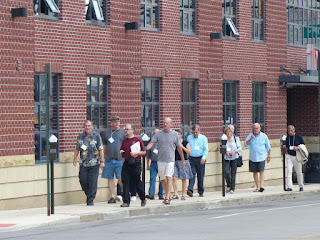 On a totally unrelated subject, the Notebook of the Association of American Editorial Cartoonists arrived in the mail last week with its coverage of our convention in Columbus. I found myself in a half dozen or so photos, including this one of several of us walking down Gay Street.

As the convention wound up, I was kicking myself for not having said hello to the Detroit Free Press's Mike Thompson, whom I succeeded as editorial cartoonist at the UW-Milwaukee Post. And here I see that on the very first day of the convention, he was immediately behind and to the right of me as a bunch of us walked from the hotel to the Columbia College of Art and Design. 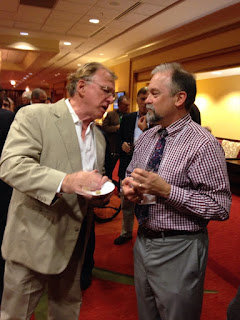 Which is not to say that I didn't get into a lot of valuable conversations with my fellow ink slingers, including that six-block long conversation with Nebraskan Paul Fell (on my right) during that Day One walk.

I also took some sage advice from Jeff Danziger, whom I wanted to tell how much I admired the sense of place he imbues in his cartoons. You really get a feel for the British pubs, Florida swamps, or seedy red-light districts he draws, and I mentioned having referred to his cartoons for tips on adding detail to a tavern cartoon. "There's no substitute for going to see the real thing," he told me.

My travel budget might cover a visit to a nearby red-light district, but any tour of London pubs is going to have to wait.

(My thanks to Scott Burns for making so many of his photos available!)
Posted by Paul Berge at 7:00 AM