New Mormon Church (that of Latter Day Saints, if you prefer) policies denying the rite of baptism to the children of same-sex parents were leaked to Facebook last week by LDS ex-communicant blogger John Dehlin. 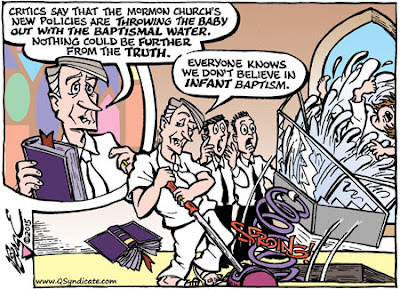 Under the new church policy, people in "same-gender" marriage have been added to the list of those acts that are considered apostasy and would be subject to disciplinary action. ...
As for children, a separate section of the handbook says that natural or adopted kids of same-sex parents, whether married or just living together, may not receive a naming blessing.
The policy also bars children from being baptized, confirmed, ordained to the church's all-male priesthood or recommended for missionary service without the permission of the faith's highest leaders — the governing First Presidency.

The LDS later clarified the policy, explaining that children of gay and lesbian parents can still receive "blessings." So there's no need for an awkward silence after the kid sneezes.

In other Utahn news, their Governor, Gary Herbert, stands apart from his fellow Republican governors (plus Jeanne Shaheen D-NH) in his refusal to bar Syrian refugees from his state. I rarely have a chance to say nice things about any Republican any more; yet I don't think there is anything I could say or draw better than the Salt Lake Tribune's excellent cartoonist Pat Bagley has.

Do check out his cartoon; it's a refreshing change from the torrent of Mayflower and No-Room-At-The-Inn clichés so many cartoonists (and meme raths outgrabing the internet) have produced this week.
Posted by Paul Berge at 7:35 AM