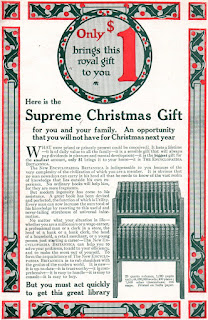 In honor of whatever this weekend stretching from Black Friday to Cyber Monday is called, Small Businessback Saturday brings you a four-page ad from the November 29, 1916 edition of The Outlook, for the Encyclopaedia Britannica. (These images are, of course, embiggenatable if you would like to peruse the small print.) 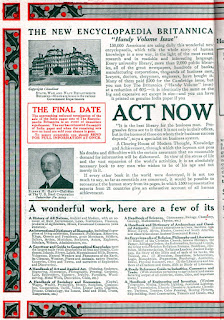 For those of you too young to know what an Encyclopaedia Britannica was, this was back in the dark and benighted days before Al Gore invented the internet. There was no Googling, and no Wikipedia at your fingertips. If you wanted to know about the Holy Roman Empire, the human circulatory system, Magellan's voyages, or the life cycle of the kangaroo, your first stop was to read up about them in the 30-volume encyclopedia set taking up an entire shelf somewhere in your house. Salesmen actually went door-to-door selling these things; they'd be sent to you one volume at a time, like a magazine description.

When you (or your great-granparents) had the full set, the subscription stopped, so you didn't get updated editions as time went on. My parents were convinced to buy a full set of the Encyclopedia Americana when they decided to start a family; so in the late '60's and early '70's when I was writing reports for school, the encyclopedia in my home was published when nearly all of Africa was owned by European colonial powers, the only thing sent up into space was a Sputnik, and the country American soldiers had been dying in for as long as I could remember didn't exist yet. 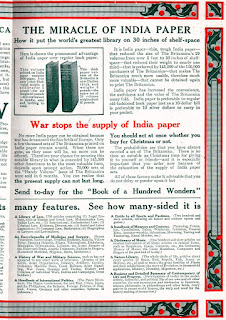 Key to selling encyclopedias was the Hard Sell. They were a considerable investment (you will not find anywhere in this four-page ad how much the volumes cost after the $1.00 introductory volume).

What I'd like to point out here is the sales pitch that this Christmas would be your last chance to take advantage of "the miracle of India paper." India paper, made from flax, was thinner than regular book paper while still about as durable and opaque. The volumes of the encyclopedia, therefore, could be thinner and less heavy than they would be with pages made from wood pulp. The full set of this encyclopedia was 35 lbs., versus 85 lbs. (16 kg vs. 40 kg.) for the wood pulp version.

There was, however, a Great War underway, and for some reason, all our flax came from Europe.
"War has devastated the flax field of Europe. Only a few thousand sets of The Britannica printed on India paper remain unsold. ... You can realize that the present supply can not last long.

"You should act at once whether you buy for Christmas or not." 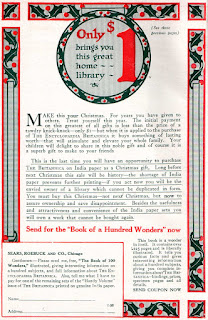 Email ThisBlogThis!Share to TwitterShare to FacebookShare to Pinterest
Labels: 1916, advertising, World War I