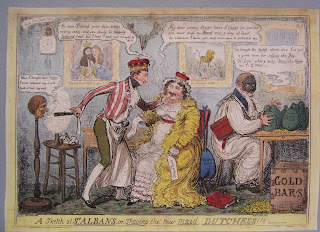 This week's transgenderfied foray into Stretchback Saturday goes all the way back to 1827. When I saw this cartoon during my visit to the Billy Ireland Cartooning Library and Museum in September, I thought the "Dutchess" in this Robert Cruikshank/Peter Wilkins cartoon looked familiar, so I took a photograph in order to check into the cartoon when I got home.

Well, I didn't find out a damned thing about it. I couldn't find anybody in my cartoon books who looked at all similar to the Dutchess, or anybody else.

What I can tell you is that "A Sketch at St. Albans, or Shaving the New Maid Dutchess!!" was in something called the Hale Scrapbook, compiled by some Boston aficionado of political, social, and theatrical cartoons, with the occasional newspaper article tossed in for good measure. The late editorial cartoonist and historian Draper Hill donated the scrapbook to the museum in 2001. Hill had purchased the scrapbook at a Massachusetts auction 1965. The auctioneer stated that the scrapbook was connected to Hale family of Hale and Dorr in Boston.

So Cruikshank wasn't drawing a guy in drag; he was putting a mustache on a woman.

Since the script of the dialogue cartoons is difficult for modern eyes to read, here's a transcript:


Clock: "Coo! Coo! Coo! Coo!"
Bust: "When I bought that melon, I never intended anyone to test it but myself."
Crowned guy: "My dear Dutchess, your chin wants mowing badly, and you should be properly lathered first, but I fear I have not strength to do it."
Dutchess: "My dear young Shaver,, here's £50,000 for you, but you must dress my beard once a day at least. Do whatever I desire you, and never dare to contradict me."
Masked guy: "I brought the match about, and I've got a good sum for selling the boy. Oh! Boy! What a lucky beau of a clerk am I! A! Men!"

The scrapbook represents years and years of clippings and is quite large -- almost three feet square and a couple inches thick. The contents have been painstakingly restored to the point where they look almost new. If you're interested, the museum has posted the whole thing on line here.
Posted by Paul Berge at 7:00 AM