We Shall Overcome. Someday.

In light of Wednesday night's terrorist assault on Mother Emanuel AME in Charlotte, I was trying to think of some cartoon I'd drawn about racism to post here on Spyback Saturday. It's not as if I've never addressed the topic, but I couldn't think of anything I've drawn that would be particularly germane in the current context.

So instead, here's a photo that ties together race relations with Fathers' Day. 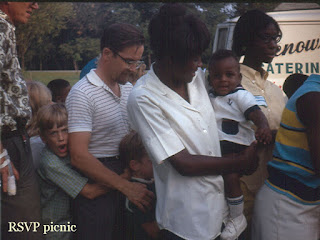 I don't actually remember much about this photo. All I know about this photo is that it was taken at a civic picnic in the summer of 1968, after the Martin Luther King and Robert Kennedy assassinations; I think this must have been during a prayer or something. That's me, my Dad and my brother.
Posted by Paul Berge at 12:51 PM