Given how the assassination of nine Black Americans in Charleston, South Carolina's Mother Emanuel A.M.E. Church during a Bible study last Wednesday night has dominated the news in the U.S. this week, my Q Syndicate cartoon this week is only very tangential to LGBT issues. 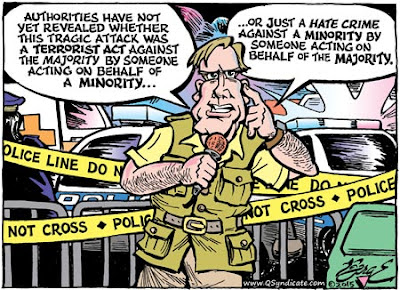 This weekend on NPR's On the Media, Brooke Gladstone noted what she called the media's rules for different races when it comes to mass murder:


"If [Dylann] Roof were Muslim, he would have been identified swiftly and universally as a 'terrorist.' Reporters would focus on his 'recruiters,' which in his case could be a multitude of white supremacist web sites, or one of the many hate groups that exist legally in his own state. But when the suspect is white, he's an 'aberration,' immediately furnished with a name, a family, a history, and a diagnosis. Whereas a black suspect, for instance, accused of far less or nothing, more often is displayed as a nameless emblem of a social disease."

In the days since, The Guardian of Great Britain led American media in unmasking the Council of Conservative Citizens as Roof's on-line recruiter. Digging further, American media found that the head of the CCC, Earl Holt III, has donated thousands of dollars to Republicans over the years (including Wisconsin Governor Scott Walker, Senator Ron Johnson, and Representative Paul Ryan); Ted Cruz, Rand Paul and Rick Santorum are among the presidential candidates now stumbling all over themselves to turn away that cash.

Well, who could have known that an organization sharing its acronym with the Coo Clucks Clan would be a bunch of racists? Besides the Southern Poverty Law Center, that is.

And while Republicans have been hastily disavowing Roof's recruiter, Walmart, Amazon, Target and even the state of Alabama have taken the rebel battle flag off their shelves and flagpoles. Anything to keep the subject away from gun control, I suppose. Minneapolis might even rename Lake Calhoun.

I do so hope that Roof is being kept up to date with these developments in the Race War he wanted to spark.
Posted by Paul Berge at 6:51 AM