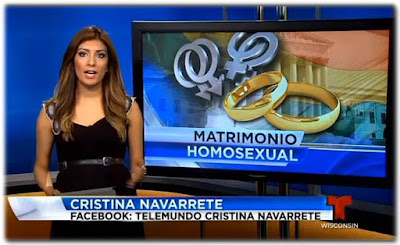 The pastor of the Latino congregation at the church where I work weekdays presided over the marriage ceremony of two Latina members this past Saturday. On Monday, a reporter from the Milwaukee Telemundo station came to do a story about it.


Apparently, this wedding is a first in some way -- it's not the first same-sex wedding in Wisconsin, in my hometown, or in the Lutheran church, but it may well be the first church wedding of a Spanish-speaking couple in the Milwaukee Telemundo viewing area or something like that. (None of the other Latino congregations here in Racine belong to denominations which bless same-sex marriages, but there are Latino ELCA congregations in Milwaukee which theoretically could.)

Trinidad and Esperanza had a civil wedding in Illinois in 2014 when same-sex marriage became legal there and it was not yet legal here in Wisconsin. After a court decision brought marriage equality to Wisconsin last fall, they decided that they wanted a proper church wedding.

Pastor Jhon Freddy has been preparing his congregation for this moment for months. At the start of the wedding ceremony, he gave a good, long pause after asking whether anyone had objection to the wedding, adding that behind people's back the parking lot afterward was no time to voice those objections. The TV report aired on Milwaukee Telemundo Monday evening, and the church has linked to the report on its web site and Facebook pages; so far, there has yet to be any sign that people are upset about it. 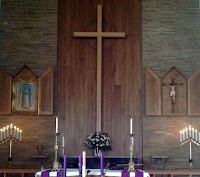 Within the congregation, there is more friction over the crucifix and image of the BVM that were added to the chancel in wooden diptychs mounted on the wall after the Latino congregation was set up (some Anglos find them excessively Roman Catholic, and some Latinos are annoyed that the Anglos close the diptych doors during the English service). Most people who objected to marriage equality left the church when the ELCA national assembly voted in 2009 to leave the choice of whether to marry same-sex couples up to individual congregations and clergy.

Outside the church, there were already Catholics accusing Emaús of poaching their flocks, and of not being a Real Church. I don't imagine that the people raising those objections on line will take Trinidad and Esperanza's wedding as anything but further proof that they are right.

Judging from Facebook "likes" at least, there appears to be a healthy base of support for Trinidad and Esperanza within the Emaús congregation -- although I can't speak to the Facebook pages of everyone who has shared the link. Two days later, I'm not fielding angry phone calls or emails. Neither the English-language TV stations nor the local newspaper have picked up the story -- nor has the North American Lutheran Church, the break-away group that left the ELCA in 2010 over The Gay Thing.