If you're a public official, and you want to tell a joke, it had better be a good one. If the joke is even slightly off, we inkslingers may never let you hear the end of it. 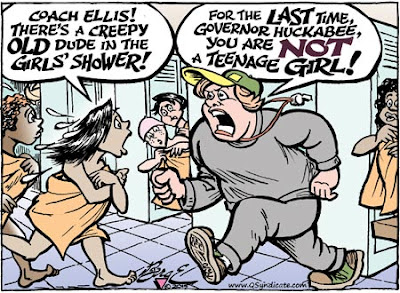 
"Now I wish that someone told me when I was in high school that I could have felt like a woman when it came time to take showers in P.E. I'm pretty sure that I would have found my feminine side and said, 'Coach, I think I'd rather shower with the girls today.'"

I'd say that at least Huckabee was finding some facility to fret over besides public rest rooms, the obsession of every conservative from Phyllis Schlafly to Larry Craig, except that he used "Omigosh There'll Be Trannies Flashing Kids In The Lavatory!" as the lead-in to his shower joke.

I'm just guessing, but I'd be willing to bet that Jenner has given more thought to what it means to be a man or a woman than Huckabee has. And to put it in language that even the former Governor might understand, I'm sure that Jenner didn't put herself through all this public notoriety just so she could enjoy the longer lines for the ladies' room.
Posted by Paul Berge at 7:55 AM