Former Speaker of the House Dennis Hastert (R-IL) was indicted last Thursday, accused of  paying someone known as "Individual A" $3.5 million in hush money over a case of sexual misconduct with a male student when he was a high school wrestling coach in Yorkville, Illinois.

Hastert is not accused of the actual sexual misconduct, the statute of limitations having expired long ago. Instead, he is accused of lying to the FBI about why the former congressman began making large cash withdrawals from his financial accounts in 2010; he had claimed it was due to a lack of confidence in the banking system and that he was keeping the cash.

Making huge cash withdrawals isn't illegal, but banks are required to file a "currency transaction report" on all cash transactions exceeding $10,000 thanks to the Patriot Act, which Hastert had taken credit for crafting and passing in a 2011 interview. 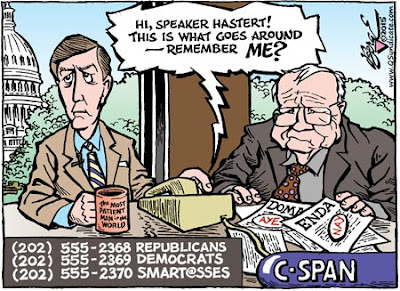 My cartoon, riffing on a 2014 appearance by Hastert on C-SPAN currently gone viral, deals less with the idea of the Patriot Act coming around to bite Hastert in the butt than his voting record on LGBT issues. In addition to Hastert's antigay votes on marriage equality and employment non-discrimination, I could also have included his stance on the impeachment of President William Jefferson Clinton.

In case you are too young to remember, the Republicans in Congress had forced the appointment of a special prosecutor, Kenneth Starr, to look into Whitewater, an Arkansas property scheme in which the Clintons had lost money. Finding nothing impeachment-worthy there, Mr. Starr moved on to investigate charges by Paula Jones that Mr. Clinton had sexually assaulted her while Governor of Arkansas. Finding insufficient evidence of wrong-doing there, too, Mr. Starr proceeded to investigate an apparently consensual extra-marital affair between the President and Monica Lewinsky, a 20-something intern at the White House.

Mr. Starr subpoenaed the President to testify under oath, wherein President Clinton flatly denied the affair. Physical evidence contradicted the President's testimony, so the House voted to impeach. Not over the sex stuff, Republicans protested, but over the perjury.


"Mr. President, I am saddened that there is clear and convincing evidence that the President lied under oath, obstructed justice, and abused the powers of his office in an attempt to cover up his wrong-doing. I regret that the President's behavior puts me in the position of having to vote for these Articles of Impeachment and to pass this matter on to the U.S. Senate for final judgment. ... In this nation, all men are created equal. Simply put, the President in our representative democracy is not a sovereign who is above the law. Tomorrow, we shall pass a difficult vote. The President's inability to abide by the law, the Constitution, and my conscience have all led me to the sound conclusion that impeachment articles must be passed." — Rep. Dennis Hastert, in the Well of the House, December 18, 1998

It is ironic, then, that Hastert, is now charged not with whatever sexual shenanigans he engaged in at Yorkville High, but with lying under oath and paying Individual A off in an effort to evade justice.

A propos of our discussion the other day of racial and gender diversity in cartoon characters, I blew an opportunity to be ethnically inclusive when I changed the C-SPAN interviewer from Pedro Echevarria to Steve Scully. Mea culpa.
Posted by Paul Berge at 8:03 AM