Welcome once again to Swashbuckleback Saturday. June is LGBT Pride Month, so I've dug up one of my cartoons from 1999.

Nowadays, the Religious Right has been seeking Special Rights to avoid having to do business with lesbian and gay consumers, but back at the end of the 20th Century, some Religious Rightwingers had hit upon the idea that LGBT Pride Parades should be forced to allow them and their antigay bullhorns to participate. 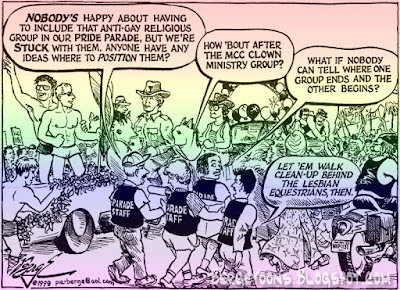 They were reacting in part to LGBT groups that had agitated to be allowed to march in St. Patrick's Day parades. That agitation, however, had already resulted in the Supreme Court ruling in favor of the right of parade organizers to exclude groups they disagreed with. Justice David Souter, writing for a unanimous court in Hurley v. Irish-American Gay, Lesbian, & Bisexual Group of Boston (1995), said, "One important manifestation of the principle of free speech is that one who chooses to speak may also decide what not to say."

By the way, "MCC" refers to Metropolitan Community Churches, a protestant denomination founded by gay pastor Rev. Troy Perry in 1968.
Posted by Paul Berge at 9:11 AM