The subject of this week's cartoon has written to ask for the original, which is as good an excuse as any for me to share this photo from our recent vacation through the Shallow South: 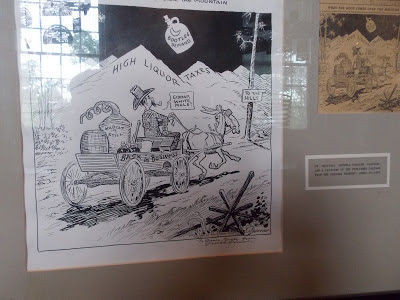 It's a framed cartoon by the Chicago Tribune's Joseph L. Parrish in the Oscar Getz Whiskey Museum in Bardstown, Kentucky. This was my best angle to minimize the reflection of the window across the room without shooting it from too oblique an angle. You can click on the picture to embiggen it; the caption is "When the Moon Comes Over the Mountain" (the name of a pop tune). The moon is a jug of moonshine (get it?), rising over the mountains of "High Liquor Taxes" while the moonshiner is heading to the hills.

The card in the frame erroneously credits the cartoon to Maxwell Parrish; perhaps someone is thinking of the painter Maxfield Parrish (1870-1966).

Joseph L. Parrish began his career in 1925 drawing for the Nashville Banner and the Nashville Tenneseean, moving on to the Chicago Tribune in 1936. In addition to his editorial cartoons, he contributed to "Dick Tracy" and created the "Nature Notes" cartoon series. He was a staunch Republican, as was any Tribune cartoonist in the McCormack era. He retired from editorial cartooning in 1970 (continuing the weekly "Nature Notes" until 1982), and died at the home of his daughter in St. Louis in  September, 1989 at the age of 84.

The museum also has a framed copy of the December 5, 1933 front page of the Chicago Daily News on this wall, with the banner headline "Legal Liquor Flows Today." I happen to have a reproduction of the same front page at home!

There were no prohibition era front pages from any of the Kentucky newspapers of the day anywhere in the museum, oddly enough. These particular exhibits must have come from a Chicagoan. I'd have thought that the end of prohibition would have caught the attention of editors in Bourbon Country.

I'd also like to share a comment about my cartoon this week left on the AAEC site by a reader in Bozeman, Montana: "On a day when another cartoonist made me so angry I could hardly see straight, what I then saw was your 'A record number of Lutherans will know who their bishop is?' cartoon. That laugh saved the day for me. Much thanks, Paul."
Posted by Paul Berge at 10:09 AM