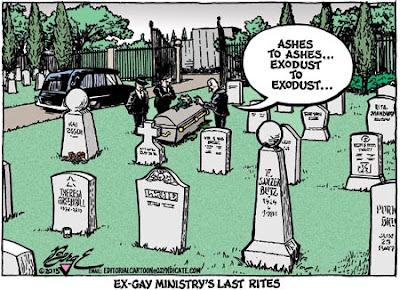 As much as I would have liked to have known when I drew this week's cartoon on Sunday night how yesterday's Supreme Court rulings on DOMA and Prop 8 would turn out, my crystal ball has no bars downstairs at my drawing board.

Perhaps the guys in charge of pray-away-the-gay ministry Exodus International were able to foresee the Court's ruling, however, and decided that this was as good a time as any to fold up its tent and sell off the circus animals.


"I am sorry that some of you spent years working through the shame and guilt you felt when your attractions didn't change," [Exodus President Alan] Chambers wrote in a statement on his website. "I am sorry that I ... failed to share publicly that the gay and lesbian people I know were every bit as capable of being amazing parents as the straight people that I know. I am sorry that I have communicated that you and your families are less than me and mine."

(Chambers is different-sex married, with children, although he admits still being attracted to men.)

One side story to this cartoon: I looked through a couple of my books for a picture of a hearse as a model for the one in the background above. One of those books was of Chas Addams cartoons; and while there were a couple of cartoons set in cemeteries, there were no hearses in any of them. There was, however, a cartoon featuring a Supermoon, which some of you may recall was the celestial highlight outdoors and on Facebook on Sunday night.

To share this find with my own Facebook friends, I located an eBay page where someone has been offering that very cartoon up for sale. You have to click on the image for a pop-up so you can read the caption, which is a bit more well-phrased than the title the seller has given it.
Posted by Paul Berge at 8:39 AM