I noticed a little something while checking out news coverage of an event held at work last week. Here's the picture at the top of the Mount Pleasant - Sturtevant Patch.com site:

It's a shot of the Sturtevant Amtrak station. Nice enough picture: blue skies, spring greenery, and the Waxdale windmills towering in the distance. I suppose that the station, which opened in 2006, is the most distinctive building in Sturtevant or Mount Pleasant other than the prison. It appears on the Sturtevant village letterhead, village sign, and village web page, (The lone image chosen for Wikipedia's Sturtevant page is of a warehouse with a caption informing you that "Distribution warehouses are a common sight along the western side of Sturtevant.")

And here's the picture atop Patch.com's Caledonia page:

That building on the left? It happens to be the old Sturtevant Milwaukee Road/Amtrak station, which was moved to a Caledonia field on Five Mile Road just east of State Trunk Highway 38 in 2009.

P.S.: Sturtevant's logo is actually based on the old train station, as shown in this photo from 2003. The new station was built to specifications so that the village wouldn't have to change all its signage and stationery. 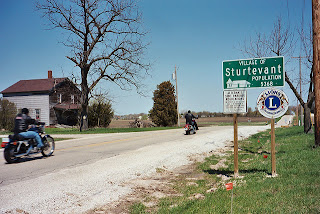 P.P.S: Even Attica, New York doesn't use its prison in its town logo.