If the election of The Rev. Dr. R. Guy Erwin as bishop of the Southern California Synod of the Evangelical Lutheran Church in America hasn't made the front page of your RSS feed, perhaps it's because we've been there before.

Here's a cartoon about what it was like ten years ago when the Episcopalians crossed that threshold: 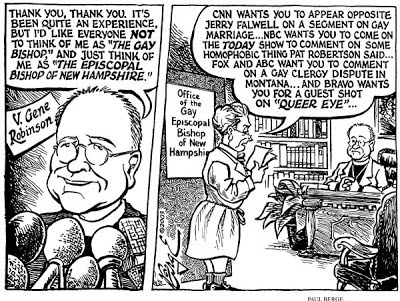 Conservative Episcopalians had conniption fits (they're called Episconniptions) over Robinson's election, and several U.S. churches went so far as to break away and join the Nigerian Anglican Church. 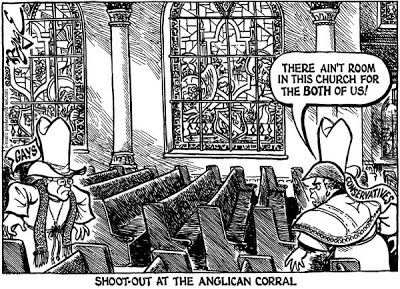 The bishop received death threats, and was pointedly not invited to the 2008 Lambeth Conference of the Anglican Communion. (This cartoon, however, was drawn three years earlier.) 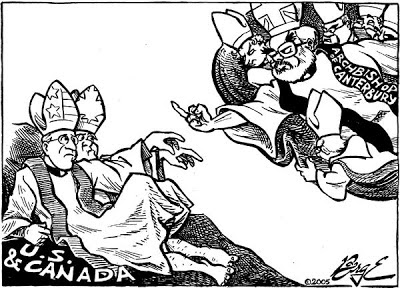 He was invited to deliver an invocation at President Obama's first inaugural. If you didn't notice, it may be because he was omitted from the live broadcast on HBO and NPR and from the Presidential Inauguration Committee's official live blog.

As for the Lutheran Church, before Bishop Erwin's election, The Rev. Eva Brunne was elected as Bishop of the Diocese of Stockholm, Sweden, in 2009. And of course, the Catholic Church had gay bishops long before Protestants got all worked up about theirs -- but I wasn't cartooning way back then.
Posted by Paul Berge at 11:05 AM