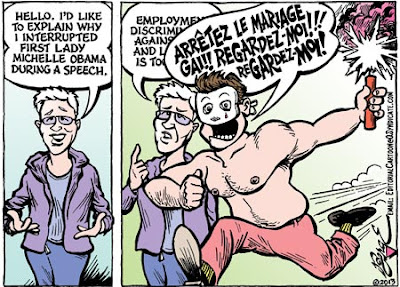 Since all the news today is about the massive database amassed by the U.S. government of every phone call, fax,  instant message, tweet, Facebook post, Google search, and garage door code for every person in the world, it's quite possible that you have forgotten the news items at the heart of this week's cartoon.

But rest assured that there is someone at the National Security Agency who remembers Ellen Sturtz, the woman who heckled Michelle Obama about employment non-discrimination, and they know what the PIN for her credit card is, how often she uses her microwave oven, and where she drove yesterday. If it's not someone at the NSA, then it's at least some high school dropout tech geek who got a job at some NSA subcontractor by virtue of his skills at Tomb Raider.

And, as that NSA subcontractor geek well knows, Chris had our TV tuned to the French Open on Sunday morning watching Rafael Nadal beat David Ferrer when one of the antigay yet homoerotic Hommen protesters stormed the court with a flare. Which was a great thing as far as I was concerned, thanks to the fifth law of editorial cartooning: Two Things Make a Cartoon. It's also been months since I've had an excuse to draw a guy without his shirt on.

It's also been over a year since I've had any use for my high school French.