Republican commenters on the Journal Times page twitted Barca for drawing so few constituents, particularly since the front page of the JT reported that over 400 people came to a simultaneous event at Emmaus Lutheran Church, where Sheriff Christopher Schmaling and other local officials addressed the concerns of the Latino community about allegations of racial profiling of brown-skinned drivers.


"Pete,,,,,You need to coordinate better. Dickert and Voces had almost 400 future voters turn out at Emmaus Lutheran Church for their rally. Best you could do was 3? Word is that Dickert has his eye on the Governors race. You better get with the program Pete. Three people....too funny." -- J.T. commenter "ordmm"

But check out the map. 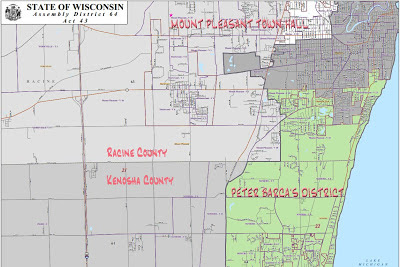 Republicans drew a tiny portion of the Village of Mount Pleasant into Kenosha Democrat Barca's district in 2011. (The lion's share of Barca's district extends well south of this map, with another leg stretching west from central Kenosha out beyond I-94.)

The Mount Pleasant Town Hall is located at the little pink star up at the top center of the map. Even for those people who realize that they are no longer represented by anyone from Racine County, the Mount Pleasant Town Hall is a considerable drive from anywhere in Barca's district. (What, the Taylor Complex Building in Elmwood Park wasn't available?)

And considering how much of the Mount Pleasant appendage of Barca's district is Latino, some of those people had somewhere else they wanted to be on that particular Monday night.

Correction: I should have placed that pink star above the "N" in "MOUNT." I was thrown by this map not showing that 90th Street is now a through road there.
Posted by Paul Berge at 5:29 PM