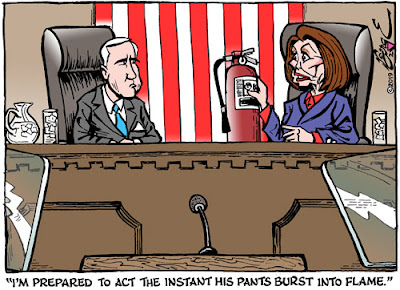 According to Politifact, Donald Joffrey Trump's 2018 State of the Union address contained only five "false" or "mostly false" statements; but by last summer, the rate of Trump's lies to the American people had increased to sixteen whoppers every day.


In his first year as President, Trump made 2,140 false claims, according to the Washington Post. In just the last six months, he has nearly doubled that total to 4,229. In June and July, he averaged sixteen false claims a day. On July 5, the Post found what appears to be Trump’s most untruthful day yet: seventy-six per cent of the ninety-eight factual assertions he made in a campaign-style rally in Great Falls, Montana, were “false, misleading or unsupported by evidence.”

It has only gotten worse since then, and Lord knows how many lies per minute he tells to the people around him. Add to that the lies he forces Sarah Succubus Sanders and others to tell for him, and it's a wonder the White House hasn't burnt to the ground yet.

When the next President arrives at the executive mansion, she or he is going to be told not to mind the smell of smoke everywhere.

It's just the scorched brimstone.
Posted by Paul Berge at 6:00 AM