One note before I go on: there must have been African-American artists from this period who took inspiration from the Great War, but I don't have any examples of their work here. Every cartoonist and artist in this post was a white male.
I do not know what exactly it was that prompted Cassel to draw this cartoon, but it stands alone against a slew of cartoons demeaning the service of Black soldiers.

Update: New York welcomed home its Harlem Hellfighters (about which, more below) on February 18, 1919. Sidney Greene at the New York Evening Telegram also drew a celebratory cartoon about the African-American regiment's triumphant parade. The quality of this reproduction isn't very good, but it's enough to get the point across.
It was not editorial page cartoonists but comic page and gag cartoonists who, even after the war, churned out unfunny cartoons depicting Black servicemen as malingering buffoons. Whoever wrote that paragraph underneath Cassel's cartoon could have easily identified "the chap who said... they wouldn't fight" by leafing through recent issues of Cartoons magazine itself.

For just one comparatively tame example, on the recurring theme of Black soldiers showing up at the field hospital:
I would be ashamed to resurrect many of the cartoons about African-American soldiers. Some of them portray Black servicemen quite literally as monkeys; most caricature them in the manner of blackface minstrel shows that demonstrate why wearing shoe leather on one's face that way is offensive to many nowadays. 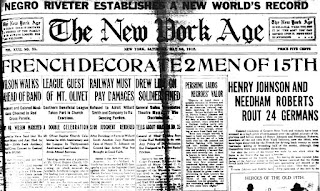 But so as not to leave the subject with that taste in our mouths, here's another cartoon by John Cassel which appears to be modeled on the same individual soldier as the one in "The Colors"; it accompanied an editorial joining Allied Armies Commander Gen. Ferdinand Foch and American Gen. John Pershing in praising the valor of Pvt. Henry Johnson and Pvt. Needham Roberts of the Harlem Hellfighters:

The editorial extended that praise to all African-American service men and concluded:

"There is just one way the American people as a whole could recognize the valor of Privates Johnson and Roberts, colored, in a manner worthy of the nation:
"To resolve that so long as negro fighters face the enemy and thereafter so long as the Republic they have helped to defend endures, throughout the length and breadth of the United States, law, public condemnation and swift punishment for the guilty shall combine to make the lynching of a negro an abhorred and obsolete crime."

✍
Returning now to 1919: Over German protests, Germany was stripped of its African colonies after the war. In the American press, German brutality figured prominently as justification for this particular punishment — not just German brutality toward its African subjects, but also the horrific acts claimed by the Entente to have been inflicted upon Belgian citizens. The irony there is that Belgium had committed a longer list of atrocities against its African colonial subjects.
Of the cartoons I've found showing Africans happy to be no longer subjects of the German Empire, this is probably the least offensive. That is setting the bar very low, obviously.

The bar is set equally low in the references in the proposed League of Nations charter to the citizens of colonial holdings. Article XIX is loaded with a paternalistic attitude toward nations of color:


To those colonies and territories which as a consequence of the late war have ceased to be under the sovereignty of the states which formerly governed and which are inhabited by peoples not yet able to stand by themselves under the strenuous conditions of the modern world, there should be applied the principle that the well-being and development of such peoples form a sacred trust of civilization, and that securities for the performance of this trust should be embodied in the constitution of the league.

The best method of giving practical effect to this principle is that the tutelage of such peoples should be entrusted to advanced nations who by reason of their experience, or their resources, or their geographical position, can best undertake this responsibility, and that this tutelage should be exercised by them as mandatories on behalf of the league.

European depictions of Africans are just as bad as the American ones (and casually use equally vile language). There is, however, at least a smidgen of sympathy for the fellow on the left of Leo Cheney's cartoon, having to choose among home rule (with "free fire water"), allied protection ("and keep your skin whole"), and continued German rule (with "free torture for all").

Racist or not, Edward Gale's "The Operation" is just creepy.

Cartoonists such as Herbert Perry of the Sioux City Journal could at least be excused (somewhat) for their caricatures of Black people because — well, assuming — they had never ever met one in person. But, gawd, where the hell did Gale come up with his idea of how surgery is done?


✍
As I sign off for the day, here's an enlisted man's sketches of Black American soldiers in France for Stars and Stripes and his memoir of the Great War.
Posted by Paul Berge at 7:17 AM