With so many candidates declaring their presidential candidacies for 2020, I'd better start these candidate caricatures early. 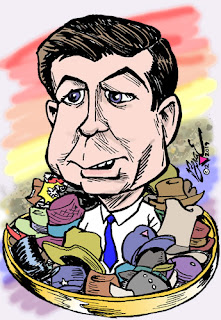 To say that South Bend, Indiana Mayor Pete Buttigieg is a long shot to become the 46th President of the United States is to belabor the obvious. The last time a sitting mayor won his party's presidential nomination was in 1812, over two centuries ago (but who's counting?), and that guy lost to James Madison. (Besides, that guy, DeWitt Clinton, was also serving as Lieutenant Governor of New York at the time, and yet his demonstrated skill at multitasking still failed to impress the electorate.)

On the other hand, every other candidate for the 2020 Democratic nomination is a long shot as well, simply by virtue of there being so many of them.

So what does Mayor Buttigieg bring to the party? He's a veteran of the war in Afghanistan, openly gay and married, and at 37 years of age would be the youngest president in U.S. history, succeeding the oldest. He has been mayor of his fairly conservative city since 2012, winning 80% of the vote in his reelection bid. He remains "highly popular" there and a "sure bet" for a third term had he chosen to run, according to the South Bend Tribune.

As he seeks to take the leap from South Bend to the White House, here's his elevator pitch:

As a veteran, he has practical opinions on American foreign policy and believes that the Corrupt Trump Administration is frittering away our leadership of the free world. As a rust-belt mayor, he has had to deal with the Corrupt Trump Administration's hamfisted tariff policies and the worsening trend of megacorporations pitting municipalities against each other to see which can prostitute itself more than the rest.


"Economic development incentives have their place, but that doesn't mean that you can — and actually I think the example that's most vividly showing this now is what's happening in Wisconsin with Foxconn. Even when you do land a company also often you're landing one if they're that sensitive to incentives that may not be that sticky and may respond to somebody else's incentives in a few short years."

With a crowded field, it's anyone's race to win, and Democrats have developed a preference for fresh new faces in the past 50 years. Hardly anyone outside Georgia had heard of Jimmy Carter when he was just one of a dozen presidential aspirants in 1975; Barack Obama had held political office for only two years at the national level when he launched his campaign in 2007 in a field of eight.

So could Buttigieg go all the way? Stranger things have happened.

One of them is declaring national emergencies as we speak.
Posted by Paul Berge at 8:00 AM