Q Toon: Into the Spiderverse 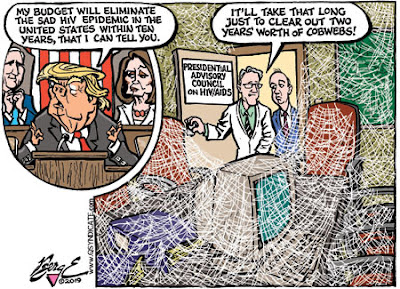 In the early months of the Corrupt Trump Administration, six members of the Presidential Advisory Council on HIV/AIDS (PACHA) resigned in protest of Donald Joffrey Trump's inaction on HIV/AIDS issues.

The following December Trump then fired the rest of the council by FedEx letter, claiming that he wanted to take PACHA "in a new direction."

For the next year, it appeared that the "new direction" was "no direction at all." PACHA sat empty and dormant, like so many of Trump's ambassadorships and sub-cabinet offices. So it was a surprise to hear Trump promise in his State of the Union message that he was submitting a budget to Congress that would somehow bring an end to new HIV infections in the United States by 2030.

That's a welcome and laudable goal, to be sure, but you have to question his methods. His lackeys claim that he fired everyone in PACHA because it was full of Obama appointees — yet another example of his knee-jerk reaction against anybody and anything with his predecessor's name attached to it. There is value in continuity and institutional memory that utterly escapes this president.

When John Kennedy promised to put a man on the moon by the end of the 1960's, his first instinct was not to get rid of everybody at NASA.

This is, at least, somewhat encouraging. Wiesman's medical career began in 1986 as an HIV/AIDS test counselor and he is past president of the Association of State and Territorial Health Officials. His successor, Nicole Alexander-Scott, commends him:


"Both as a clinician caring for patients with HIV and as a policymaker working to eliminate the disease, I have witnessed firsthand John's commitment, passion, and expertise when it comes to HIV. He is supremely qualified to co-chair the reconstituted Presidential Advisory Council on HIV/AIDS and will lead bold public health actions to stop HIV."

Schmid spoke out last year about issues arising from provisions hidden in insurance plans that complicate access to affordable and effective drug treatment. He is encouraged by Trump having included HIV/AIDS treatment in the address, telling reporters, “There’s a lot of distrust between the community and the administration, understandably. This could be a good opportunity to show they’re committed to this.”

Even a broken clock is right twice a day. Perhaps Wiesman and Schmid are Trump's two for today.
Posted by Paul Berge at 8:27 AM