Q Toon: Please Hold Your Applause Until the End 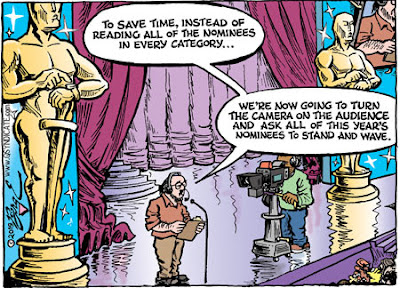 Thanks to Kevin Hart's having to withdraw as host of this year's Oscars because of some homophobic remarks, the Academy Awards will air this Sunday without a host. Having thus shaved some eight or nine minutes from the 7.5-hour telecast, the Academy floated some other trial balloons to tighten up the program.

One idea was to have some of the more esoteric awards given out during the commercial breaks. That balloon was immediately shot down by sound mixers and film editors upset at the prospect of not being able to tell their children to go to bed on live TV. Which is why they went into show biz in the first place.

Another idea was to perform only two of the five Best Original Song nominees. After loud protest from the musical community, a compromise has been reached and four of the songs will be performed.

There are so many other ways to save time at the XCIst Academy Awards. Why waste all that time having the winners walk up to the stage from their seats in the audience, stopping to shake 20-30 hands along the way? Have all the nominees standing on stage the whole time. The Best Supporting Actor and other early nominees can all take their seats as soon as their winner is announced, and I can assure you that the Best Picture nominees will want to see the proceedings move right along.

And let's limit each broadcast to one single lifetime achievement award, say, the Irving Thalberg Award To The Oldest Person In The Room Without An Oscar Yet.

On second thought, that award would soon go to the orchestra conductor, and there would be nobody to play him offstage once he starts thanking all the cellists, his grade school music teachers, and Otto Lagervall.
Posted by Paul Berge at 7:56 AM