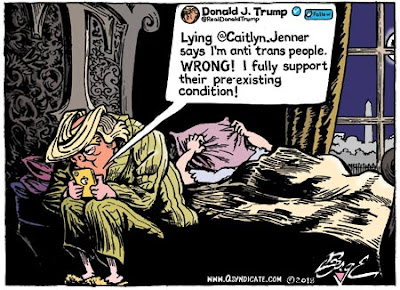 I usually try to avoid drawing about the same news story two weeks in a row, but Caitlyn Jenner weighed in on the order in the works by the Corrupt Trump Administration to define transgender people out of existence.

In an op-ed written for the Washington Post, long-time Republican Jenner recalled her hopes for the promise of a Trump presidency.


Following Trump’s election as president, I saw fertile ground for change within the Republican Party on LGBTQ issues. Trump was the first Republican presidential candidate to claim to support this valuable, vulnerable community, and I was encouraged by the applause he received when he said at the Republican National Convention in July 2016 that he would stand up for the LGBTQ community. ...

But the reality of the Corrupt Trump Administration has proven too much for her:


Sadly, I was wrong. The reality is that the trans community is being relentlessly attacked by this president. The leader of our nation has shown no regard for an already marginalized and struggling community. He has ignored our humanity. He has insulted our dignity. He has made trans people into political pawns as he whips up animus against us in an attempt to energize the most right-wing segment of his party, claiming his anti-transgender policies are meant to “protect the country.” This is politics at its worst. ...

One doesn’t need to look back far to witness the president assault our nation’s guardians with a ban on trans people serving in the military or assail our nation’s future with a rollback of Obama-era protections for trans schoolchildren.

It’s clear these policies have come directly from Trump, and they have been sanctioned, passively or actively, by the Republicans by whose continued support he governs. My hope in him — in them — was misplaced, and I cannot support anyone who is working against our community. I do not support Trump.

I don't follow Mr. Trump's Twitter feed, but it's rather difficult to avoid hearing about anything his account blurts out in the middle of the night. I haven't actually heard that our petulant Tweeter-in-Chief has lashed out against the defection of one of the six or seven most prominent Kardashians. Still, if he weren't so preoccupied with whipping up anti-Hispanic panic against the caravan marching the entire length of Mexico toward the U.S. border, he'd probably have come up with something like this.

See? Republicans actually do care about pre-existing conditions.
Posted by Paul Berge at 7:44 AM