Once a month, I turn the blog over to my dad, who writes an "Environmental Stewardship" column for his church's newsletter. Here's his missive for December:

As was recently pointed out in a sermon, economics is all about making choices. The same thing can be said about ecology, which comes from the same Greek root. The choices that we, that is modern homo sapiens, have made have had dire effects upon virtually all other living beings on this earth. These effects are adding up to what many scientists have called the “sixth great extinction,” as disastrous as that which wiped out the dinosaurs and very many other species.

I am sure that each of us can say that our individual acts have not caused any endangered or threatened species to go extinct. Yet collectively, that is what is happening … as many as several species every day. 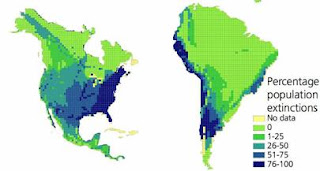 One piece of federal legislation that is working to stop extinctions in the USA is the Endangered Species Act. It may not be perfect, but it has worked for the Bald Eagle and other less famous species. In protecting certain species, it has protected critical habitat that is beneficial to many other species.

But the Endangered Species Act is itself in danger. There are those in government, both elected and appointed, who would restrict the ESA by such amendments as would allow “economic or other impacts” to override listing of endangered or threatened species. Other changes would restrict actions on threatened species (one step down from endangered) and critical habitat. A series of nine amendments, already or soon to be introduced, would permit insecticides that are harmful to bees and other beneficial insects, and lead to less consistent and reliable protection of species. Although the amendments are labeled “ESA Modernization Package,” environmental organizations have called them the “Expanded Extinction Package” or “Poisoned Pollinators Provision.”

I encourage all environmental stewards to let their elected officials know what they think of any efforts to weaken the Endangered Species Act.