At the End of the War to End All Wars 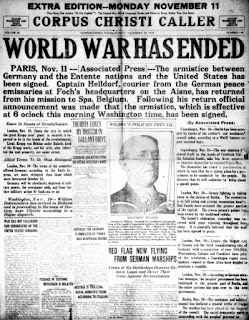 Surrenderback Saturday today observes the centennial of the end of World War I with a quick survey of the editorial cartoons that appeared in America's newspapers on the eleventh day of the eleventh month of 1918.
Kaiser Wilhelm Hohenzollern having abdicated days earlier, Germany surrendered to the Entente powers effective at 11:00 a.m. Paris Time, November 11. It accepted Woodrow Wilson's Fourteen Points as the basis for the post-war world and agreed to pay heavy reparations to the victorious allies.
The Austro-Hungarian Empire, which had launched the war in 1914, no longer existed; Vienna looked on, spent and helpless, as its various Slavic groups established break-away republics and Hungary divorced in the "Aster Revolution" of October 31. On November 11 Emperor Karl I stepped away from active participation in Austria's affairs of state (although he did not officially abdicate).
Most of the American cartoons I have found, however, focused on Kaiser Wilhelm's fate.
World War I marked the last gasp of royalty as the basis of government in most of Europe. Leftist revolutions took over in Berlin and Vienna, and republics of various stripes took root throughout Mitteleuropa where Kaiser Wilhelm had planned to crown Germanic monarchs, as well as in the former Viennese vassal lands. In most remaining countries with a crowned head of state, elected legislatures would do the actual governing.

Yet monarchy was not the only institution to take a beating. Military technology had progressed greatly in the few years since the 19th Century. For the first time, war could be fought in the air (essentially by amateurs and hobbyists) and underwater, and with a long-range gun located nearly 100 kilometers from its target. Chemical weapons killed and maimed even those sheltering in their trenches. Most deadly, however, were the rapid-fire machine guns and the improved accuracy of artillery, many times more fatal than the blunderbusses and cannons of old; yet the generals on both sides insisted on the outdated tactic of sending wave after wave of soldiers "over the top" into the line of fire.
Those soldiers who managed against the odds not to be mowed down by enemy fire returned home disillusioned by the incompetence and stubbornness of their commanding officers. As a result, in stark contrast with those of earlier wars, the memorials and statues to World War I (and our observance of Veterans' Day) celebrate the common soldier and not the commanding general.
A poem by British soldier Wilfred Owens, included in Benjamin Britten's War Requiem, twists the biblical account of Abraham and Isaac:

So Abram rose, and clave the wood, and went,
And took the fire with him, and a knife.
And as they sojourned both of them together,
Isaac the first-born spake and said, My Father,
Behold the preparations, fire and iron,
But where the lamb for this burnt-offering?
Then Abram bound the youth with belts and straps,
And builded parapets and trenched there,
And stretched forth the knife to slay his son.
When lo! and angel called him out of heaven,
Saying, Lay not thy hand upon the lad,
Neither do anything to him. Behold,
A ram, caught in a thicket by its horns;
Offer the Ram of Pride instead of him.
But the old man would not so,
but slew his son, —
And half the seed of Europe, one by one.
Even though the allies' victory was assured several days before Germany surrendered, the fighting continued right up to the stroke of 11:00 November 11. As a final tribute to the ghastly pointlessness of the military strategy of those "old men," some 2,000 sons on both sides were killed in those final eleven hours of the war.
The victorious allies sowed the seeds for the end of their colonial empires. Asian and African people who had seldom or never known popular rule saw the Entente powers grant self-determination to the people of eastern Europe and saw no reason why their fate should be any different. But Germany's colonies and the Ottoman Empire were divvied up among the European victors instead, without regard to their subjects' ethnic, religious and tribal identities — with repercussions that continue to echo a century later.
Punishing terms imposed upon Germany by the Treaty of Versailles led to the Nazi's "Make Germany Great Again" nationalism, and to the Great War's sequel in 1939-45.

Emerging from the war relatively unscathed, the United States took over from London as the seat of global finance, launching a robust economy for the next decade. For many, this was a time for optimism that the cause of democracy was on the ascendancy around the world (by which we meant Europe).
Further to the left, the world socialist movement saw the end of the war as their chance to overthrow the forces of capitalism and plutocracy. A mutiny by German sailors at Wilhelmshaven at the end of October spread, fueled by socialist unrest, and sent Kaiser Wilhelm fleeing into exile on November 9.

It's unfortunate that The Masses had been shut down, scattering its cartoonists to the winds; but I still have an example for you of a radical left-wing cartoon from the socialist New York Call. (Ryan Walker's cartoon in the November 11 issue had no relevance to war or peace, so here's his cartoon from the next day.)
Walker's cartoon depicts the "Worker" demanding his place in the sun from human figures Capitalism, Militarism, Profiteer (plus two others I can't read) and a snake labeled "Reactionary Press." Under his feet are the ruins of Russian, German and Austrian autocracy. And since I relaxed the deadline to include Ryan Walker, here's the November 12 cartoon by Clifford Berryman, who didn't get a cartoon in his paper the previous day.
While cartoonists across the United States were celebrating the fall of the Kaiser and the triumph of democracy, readers of the Des Moines Register's front page on November 11 were treated to a more somber message from the pen of John "Ding" Darling. Every party needs its pooper.
Tune in again next week for a look at what European cartoonists were up to in the immediate aftermath of the war.