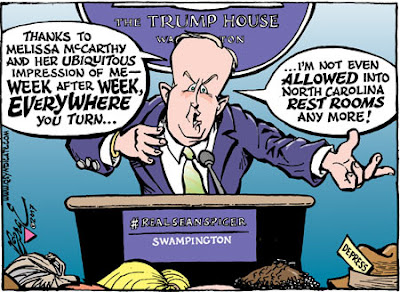 With a new administration comes a host of new Saturday Night Live characters, and White House Press Secretary Sean Spicer's combative daily briefings have quickly shown him to be ripe for parody. It may be a one-joke sketch, but then, isn't that special? So are nearly all memorable SNL characters.

Because they're good enough, they're smart enough, and doggone it, people like them!

I had to draw this one quickly. HB2 clones are currently moving through the digestive tract of legislatures in Alabama, Illinois, Kansas, Kentucky, Missouri, New York, South Carolina, South Dakota, Tennessee, Texas, Washington and Wyoming; several of those states are immune to the threat of never hosting another Superbowl.
Posted by Paul Berge at 7:31 AM