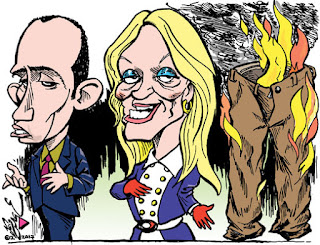 Just read it from left to right.

Now, I really wish I had posted this cartoon before Donald Joffrey Trump's little hour-and-a-half press tantrum yesterday. I had a little problem with my scanner this week, and it was the regular syndicated cartoon's turn to appear here yesterday, so I figured I'd just hold off until today.

Well, nobody's talking about the lies of Stephen Miller or Kellyanne Conway now.

Boy, I wouldn't want to be whoever that Trump loyalist was. I'll bet that person is in for a serious finger wagging.