Ed Garvey died this week at the age of 76. Garvey was a labor lawyer from Burlington, Wisconsin, perhaps best known for having been executive director of the National Football League Players Association during their strikes in 1974 and 1982.

After leaving the NFL Players Association post, he entered Wisconsin politics, serving as Wisconsin's Deputy Attorney General, then winning the Democratic nomination for the 1986 Senate race against Republican Robert Kasten. His campaign against Kasten, an unremarkable freshman senator elected in the Reagan wave of 1980, has to be included among the Wisconsin Democratic Party's many lost opportunities. 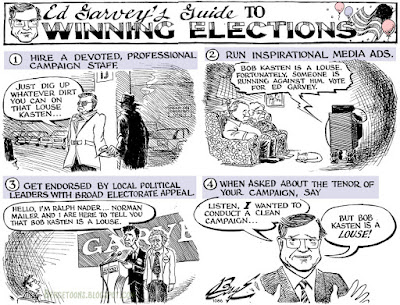 Garvey's TV and radio ads hammered Kasten, highlighting — among other things — the Senator's refusal to release his tax returns, and his having been arrested in 1985 for driving drunk on the wrong side of the road and running a red light (the charges were dropped). Consumer advocate Ralph Nader came to Wisconsin to campaign for Garvey, calling Kasten a "chronic drunk" who needs "rehabilitation rather than re-election." Kasten's campaign manager countered Nader's attack by accusing Garvey of "mov[ing] his campaign from the gutter to the sewer." 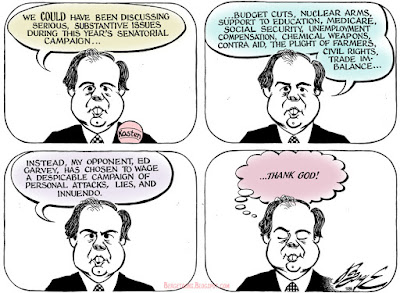 Nationally, 1986 was a good year for Democrats, but not in Wisconsin. With Kasten vastly outspending Garvey, there wasn't much doubt that he would win re-election. The race ended up being a bit closer than some pre-election polls had predicted; so if Garvey had somehow managed to pull an upset win, there would still have been readers who would have found this post-election cartoon (drawn before the returns were in) appropriate. 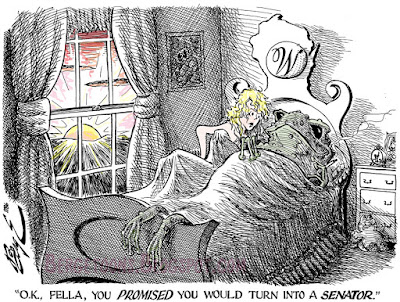 Garvey made a quixotic run for governor against Tommy Thompson in 1998, at the height of Governor Thompson's popularity. At the time I was drawing separate cartoons for two University of Wisconsin student newspapers, the Business Journal of Greater Milwaukee, In Step Magazine and Q Syndicate; yet somehow, I did not draw a single cartoon about the gubernatorial race all year. The Business Journal editorialized on the Feingold-Neumann senate race a few times, requiring cartoons to match; the LGBT press was more interested in Tammy Baldwin's election to Congress.

Madison blogger Gregory Humphrey summed up Garvey's legacy in a more positive light than my cartoons have, so I'll let his words be the ones to leave you with:


"His optimism about the future needs of our political institutions was always strong as he continued to speak out and strongly support those who had a message that often echoed his own. He proved that politics it is not only about winning or losing but keeping the spirit of the fight alive even when the odds are against you."