When speculation was circulating that Donald Joffrey Trump would name Judge Neil Gorsuch to fill Judge Merrick Garland's seat on the Supreme Court, my first thought was to wonder if he were any relation to Anne Gorsuch Burford, Director of the Environmental Protection Agency in the first years of the Reagan administration.

As it turns out, he is her son.

A minion of Interior Secretary James Watt, Anne Gorsuch turned the mission of the EPA on its head, aiming to protect corporate profits at the expense of the environment. From her obituary in the Washington Post in 2004:


Her 22-month tenure was one of the most controversial of the early Reagan administration. A firm believer that the federal government, and specifically the EPA, was too big, too wasteful and too restrictive of business, Ms. Burford cut her agency's budget by 22 percent. She boasted that she reduced the thickness of the book of clean water regulations from six inches to a half-inch.

Republicans and Democrats alike accused Ms. Burford of dismantling her agency rather than directing it to aggressively protect the environment. They pointed to budget cuts for research and enforcement, to steep declines in the number of cases filed against polluters, to efforts to relax portions of the Clean Air Act, to an acceleration of federal approvals for the spraying of restricted pesticides and more. Her agency tried to set aside a 30-by-40-mile rectangle of ocean due east of the Delaware-Maryland coast where incinerator ships would burn toxic wastes at 1,200 degrees centigrade.

We cartoonists were no kinder to her than we were to Watt. I drew these cartoons in February and March, 1983, as scandal exploded around Ms. Gorsuch and her agency. 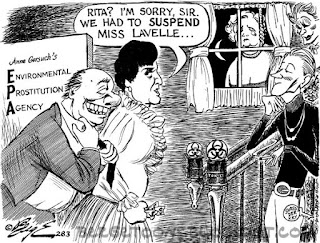 Charged with mishandling of the agency's $1.6 billion "superfund" for handling toxic waste, Gorsuch refused to turn over records to Congress and was found in contempt of Congress. There was also a scandal over promising a small New Mexico oil refinery that it could ignore existing limits on lead in gasoline because loosening of the regulations was planned. The regulations weren't loosened after all, and the company ended up having to pay huge fines. 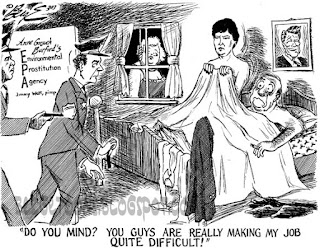 To explain a couple things in my cartoons: between the first and the second, Gorsuch married Robert Burford, whereupon she took his last name. (That's not him in the bed, by the way; it's a generic industrialist character.) The woman hanging outside the windows is newly resigned Superfund administrator Rita Lavelle, who would be convicted in 1984 of lying to Congress about the superfund scandal.

I wasn't the only cartoonist to reach for the prostitution metaphor to depict Gorsuch Burford's handling of the EPA, but there were other allusions made by better cartoonists than me. Pat Oliphant depicted her as Maleficent from Disney's Snow White. Riffing on Ghostbusters, Jim Borgman portrayed her as an ectoplasmic spectre. Herb Block drew her as a jackbooted prison guard. After her resignation, Herblock drew Reagan and an aide tossing her into a smoking volcano labeled "Administration Environmental Scandals", with a slip labeled "Lavelle" nearby, as the aide tells the President, "We've given it two of our finest maidens!"

On a less personal level, Jeff MacNelly's response to the scandal was to depict the EPA as a garbage truck with all its garbage in the driver's cabin.

Reagan later appointed Gorsuch Burford to be chair of the National Advisory Committee on Oceans and Atmosphere, a post she dismissed as a "nothing-burger." The House and the Senate passed resolutions urging on President Reagan to withdraw the appointment; in the end, Gorsuch Burford decided not to accept the position.

In her 1986 book, Are You Tough Enough, Gorsuch Burford complained: "When congressional criticism about the EPA began to touch the presidency, Mr. Reagan solved his problem by jettisoning me and my people, people whose only 'crime' was loyal service, following orders. I was not the first to receive his special brand of benevolent neglect, a form of conveniently looking the other way, while his staff continues to do some very dirty work."

I brought Gorsuch Burford back one more time for a cartoon marking the end of Ronald Reagan's presidency in 1989. She's behind Reagan in the supporting cast between Robert Bork and James Watt. 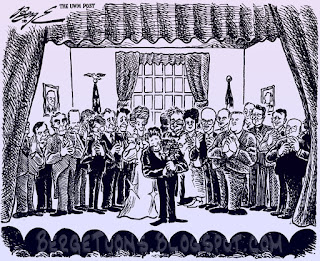