After two consecutive cartoons featuring Trump administration flacks, Spokespersonback Saturday takes a brief moment to recall mouthpieces of the past.

Brief, because I haven't drawn many cartoons about them.

Not that their faces aren't well known; but I'm usually more interested in highlighting the presidents rather than the schlubs who have to speak for them. But sometimes I want to populate a cartoon with assorted administration figures, or to have someone else speak for the President.

The latter was the case in this 1985 cartoon of Ronald Reagan's Acting Press Secretary, Larry Speakes. 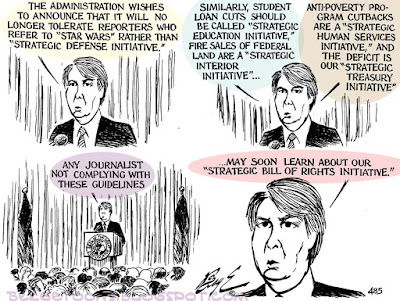 An adversarial relationship between an administration and the White House press corps, as you see,  is nothing new.

I just want to note what an apt name Larry Speakes had for a spokesperson. It's as if he were born to have that job. I can imagine that the family name derived from a long line of Speakespersons for medieval kings and princelings.

There wouldn't be another Press Secretary so aptly named until Barack Obama appointed Josh Earnest, whose name literally means "Just Kidding, But Seriously."

Another item to note is that Speakes, and his immediate successor, Marlin Fitzwater, were "Acting" or "Deputy" Press Secretaries. James Brady was officially kept on in the position of Press Secretary throughout the Reagan administration, in spite of having suffered severe brain injury in John Hinckley, Jr.'s  assassination attempt on the President only two months into the job. (Fitzwater continued as full-fledged Press Secretary in the George H.W. Bush administration.)

Technically, then, Brady was not still Press Secretary when the "Brady Bill" (officially the Brady Handgun Violence Prevention Act) passed the Congress and was signed by President Bill Clinton in 1993, prompting this cartoon: 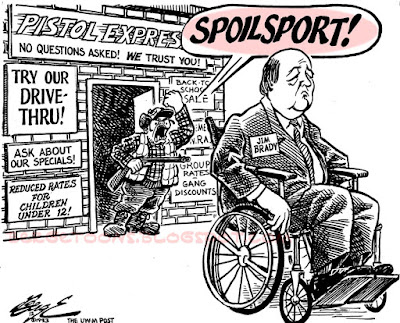 The importance of Brady Act in ending Democrats' domination of Congress cannot be understated. Republicans took over both houses in 1994 with loud support of the National Rifle Association in key races. During the George W. Bush administration, with Republicans in charge of the legislative and executive branches of government, hey systematically gutted one firearm safety measure after another. With that monopoly of power again today, in fact, the NRA and its minions in Congress and the White House even want to make sure that mentally unstable Americans have free and easy access to guns.

Just like NRA poster boy John Hinckley, Jr., who is a free man these days.

Mr. Brady is no longer available to comment.
Posted by Paul Berge at 7:00 AM