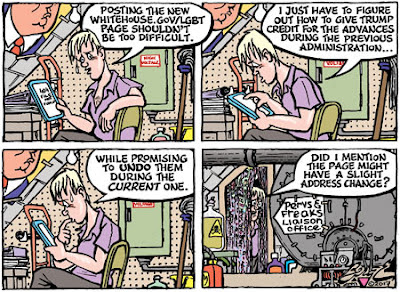 Many in the LGBTQ community were concerned when the LGBTQ page disappeared from the official White House web site.

There have been conflicting signals from the Donald Joffrey Trump administration on LGBTQ issues: there has been a uniform hostility among Trump cabinet appointees to LGBTQ concerns; and we can probably assume that the fellow he has appointed to fill Merrick Garland's seat on the Supreme Court believes that if the Founding Fathers weren't prescient enough to include LGBTQ rights in the Constitution, those rights do not exist.

On the other hand, the administration assures us that it has no intention of revoking President Obama's executive order protecting LGBT government and government contractor employees. “President Donald J. Trump is determined to protect the rights of all Americans, including the LGBTQ community,” according to the White House statement.

Yet establishing a right to discriminate against LGBTQ citizens is one of the most important issues to Trump's supporters on the so-called religious right. It strains credulity to think that they are going to be content with leaving anything in place that protects the rights of the LGBTQ community in any way.

Meanwhile, the White House appears to have no plans to name a liaison to the LGBTQ community. Even the imagined office in my cartoon may be more than we could hope for.
Posted by Paul Berge at 8:04 AM