We are coming up on the centennial of the race riot and massacre that wiped out the Greenwood neighborhood of Tulsa, Oklahoma.

According to contemporary reports, a 19-year-old Black man named Dick Rowland accidentally stepped on the foot of a White woman, Sarah Page, in the Tulsa department store elevator where she worked. She slapped him across the face, and he grabbed her arm. Later reports suggested that Rowland tripped as he entered the elevator and grabbed Page by the arm to stop from falling. Either way, she screamed for the police, who arrested Rowland and charged him with assault and battery.

The next afternoon's Tulsa Tribune reported the story under the headline "Nab Negro for Attacking Girl in an Elevator," casting Rowland in the worst possible light:

"A negro delivery boy who gave his name to police as "Diamond Dick" but who has been identified as Dick Rowland, was arrested on South Greenwood avenue this morning by officers Carmichael and Pack, attempting to assault the 17-year-old white elevator girl in the Drexel Building early yesterday. ...

"The girl said she noticed the negro a few minutes before the attempted assault looking up and down the hallway on the third floor of the Drexel Building as if to see if there was anyone in sight but thought nothing of it at the time.

"A few minutes later he entered the elevator she claimed, and attacked her, scratching her hands and face and tearing her clothes. Her screams brought a clerk from Renberg's store to her assistance, and the negro fled. He was captured and identified this morning by both the girl and the clerk, police say.

"Rowland denied that he tried to harm the girl, but he admitted he put his hand on her arm in the elevator when she was alone.

"Tenants of the Drexel Building said the girl is an orphan who works as an elevator operator to pay her way through business college."

That account (and an inflammatory Tribune editorial, all copies of which disappeared as soon as an official investigation was launched) is credited with inflaming passions in Tulsa; within days, Victor F. Barnett, managing editor of the Tribune, stated that his paper had since learned that the original story, that the girl's face was scratched and her clothing torn, was untrue.

Responding to rumors that Rowland would be lynched and reports that a White mob had massed at the jail, 75 Black men, some armed, arrived at the jail to protect him. Sheriff Willard McCullough assured them that Rowland was safe, so they began to leave.  But then some White man grabbed at a Black man's gun, a shot was fired, and all hell broke loose.

Whites destroyed 35 square blocks of what was until then a thriving African-American community, even attacking it from privately leased airplanes.  For a complete account and contemporary photographs of the violence, I'll refer you to the official report published in 2001 by the Oklahoma Commission to Study the Race Riot of 1921.

I have been searching for several months to find editorial cartoons to illustrate today's post; to my great disappointment, I have only found two*. The first is from a presumably Black artist in New York, who may or may not have drawn under a pseudonym; I found it on the front page of the Chicago Whip, an African-American weekly.

The only other cartoon I've managed to find is this unfortunate example by "Ding" Darling of positing false equivalence between Whites' and Blacks' culpability for the violence. That the black figure looks so much like a gorilla only compounds the offensiveness of the cartoon.

But it's the only cartoon by a White cartoonist I could find anywhere. 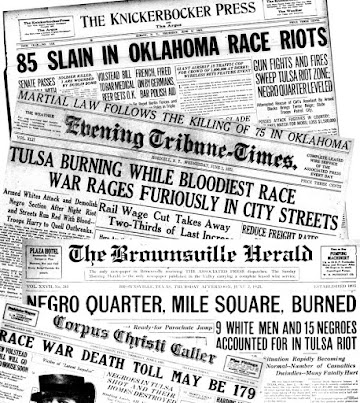 It is not as if the Tulsa riots were not front page news nationwide.

Speaking to the graduating class of Lincoln University Theological Seminary in Pennsylvania on June 6, President Harding lamented the violence, but promised to do nothing about it. "Much is said about the problem of the races. There is nothing that the government can do which is akin to educational work in value. One of the great difficulties of popular government is that citizenship expects government to do what it ought to do for itself. No government can wave a magic wand. The colored race, to come into its own, must do the great work itself. The government can only offer the opportunity."

Opining that White and Black citizens live together peacefully, the Chicago Tribune blamed "corrupt politics": "Corrupt politics is directly responsible for race riots. Let us face that fact and not lose ourselves in secondary considerations. Race riots are not problems of race; they are problems of government. There will be no race riots where politics has not corrupted government" (June 6). The editorial failed to explain how the Trib's charges of corruption were relevant to Tulsa, and probably didn't inspire any daredevil to try integrating any White Chicago neighborhoods to test the "living together peacefully" claim.

The New York Age (June 13) noted an editorial in Birmingham News laying blame for the riot "on the Negroes themselves. This editorial article relates how 'a band of belligerent Negroes' moved down on the jail with the purpose of liberating one of their number charged with an atrocious crime, and gives this as the cause of the uprising of the whites to safeguard the processes of law. It then comments on the actions of the Negroes in the following language: 'It is this attitude, the jungle instinct of the African, which arouses the keen resentment of the whites.'"

The Vicksburg Herald of Mississippi reported (June 8): "It was believed by authorities that the trouble was largely caused by negroes who have been preaching the gospel of so-called 'equality.' Some of these characters are described as fanatics. The white population tonight appeared sympathetic toward the negro refugees and the authorities were guarding against another outbreak of the negroes."

Then there was Independent and Harper's Weekly (June 18), which likened the Tulsa riot to Turkey's Armenian genocide: "World public opinion does not draw the distinctions we would like. Exactly as we hold Turks as a whole responsible, as Americans are held responsible, as a whole, when negro massacre succeeds negro massacre, as for two years past. ... No possible question exists that in the streets of Northern cities as well as Southern, a negro, 'a citizen of the United States' by birth and by every constitutional right, has again lacked 'the equal protection of the laws,' pledged by the Fourteenth amendment." Sharply disagreeing with President Harding, the editorial predicted, "If the States continue to fail in their duty the American people will place the task in Federal hands."

So where were the nation's editorial cartoonists in all this?

There were some I had hoped would have spoken up, such as Haydon Jones. In March, Jones drew this cartoon in reaction to a murder case in Georgia involving a white landlord, John S. Williams, who had eleven Blacks working as peons on his farmland killed. (Yes, Georgia had "peonage," and so did Oklahoma for that matter.) I looked to find what Jones might have drawn in response to the Tulsa riot, only to discover that he apparently stopped drawing for the New York Evening Post in mid-April.
A photoengravers strike in New York (I'll come back to that on another Saturday) may have stopped a couple other cartoonists who might have addressed the massacre. Meanwhile, with Cartoons Magazine running only gently humorous cartoons, and periodicals such as Outlook and Independent preferring photographs to convey the horror rather than cartoonists' work, there are several cartoonists who I think are likely to have drawn about the event whose work I just haven't managed to access.

Furthermore, there quickly followed more unrest in Europe, the catastrophic Pueblo Flood in Colorado, a violent strike of miners in West Virginia, lurid crime stories, and all manner of shenanigans in state and local politics. White cartoonists' attentions and those of their publications moved on and moved away.

African-American newspapers around the country, not surprisingly, followed developments closely. Very few of them, however, kept cartoonists on as regular features at this point in history. (Side note: The Tulsa Star, a vibrant Black-owned newspaper, was deliberately targeted and its building burned to the ground in the riot; no copies of the paper after January 29, 1921 exist.)

Perhaps even more shockingly than the predictable tendency of newspapers, especially in the American South, to blame African-Americans for the violence inflicted upon them, there were other supposedly professional journalists who simply did not take the matter seriously. At all. This dismissive newspaper headline was not published in Dixie, but in sunny California. Playing up local stories is not the issue;  I understand that some words change connotation over time; and I wasn't expecting 21st Century language sensitivity — but what the heck, Evening News? "Tulsa Negroes" wouldn't fit on that line?

Getting back to cartoons: one comes across the occasional cartoon making light of America's race relations problem. Cartoons perpetuating the stereotype of African-Americans as lazy, unintelligent, or worse abounded. Even the normally gentle and benign work of H.T. Webster includes this specimen that, while avoiding insulting caricature, has not aged well.

I think you can, however, compare it to any of today's cartoons (including my own) of Marjorie Taylor-Greene, the QAnon Shaman, and other conspiracy fabulists. Who can predict what will be seen in retrospect 100 years hence as making light of the reprehensible?

* P.S.: Fellow cartoon blogger Mike Peterson has dug up a third. As I wrote above, I am sure that there were more to be found. I'll post them as they turn up.