I must acknowledge Google Books' archive of Cartoons Magazine as having been an invaluable resource in putting together my series of essays featuring editorial cartoons of events 100 years ago. But sadly, that resource is approaching the end of the line.

Not Google or Google Books (at least not just yet — nothing on the internet is as permanent as we were once led to believe, especially the "information wants to be free!" part).

What I mean is that Cartoons Magazine underwent significant changes in 1921, and not for the better as far as my purposes are concerned.

Cartoons Magazine was first published in 1912, by Henry Haven Windsor in Chicago, Illinois. The magazine featured a wide variety of mostly editorial cartoons at first, on all the major issues of the moment: U.S. government, elections, international affairs, wars, the economy, you name it. Most cartoonists represented in the magazine were from the U.S., but examples from Europe, Australia and Latin America appeared frequently; and occasionally some from Japan and the Philippines as well. At first, the cartoons stood without much explanatory text, but over time they came to be be accompanied by humorous essays on the topic — unless, as in the example of the sinking of the Lusitania, whimsy did not suit the subject.

The typical issue would also be leavened with less topical gag cartoons and jokes, slice of life cartoons, and seasonal cartoons about holidays, the weather, sports, school days, and so forth. "What the Cartoonists Are Doing" became a regular feature, reporting such things as when a cartoonist was moving to another newspaper, getting married, presenting a public demonstration, joining the armed forces, retiring, or had gone to draw the pearly gates in person.

Other features that came and went were profiles of individual cartoonists, two-page cartoon spreads by a given cartoonist drawing about the city where he was working, feature stories about historical cartoons and cartoonists, and full-page cartoons drawn expressly for Cartoons Magazine.

Advertisements in the front and back pages promised lucrative careers to graduates of this or that cartooning school. Charles "Bart" Bartholomew backed his claims up with reports of the exploits of his school's alumni; and if hardly any of his graduates achieved any lasting fame, I'm sure that several made a comfortable career in those days when they had multiple employment opportunities in any given city.

One thing that hardly ever appeared in Cartoons Magazine was the work of William Randolph Hearst's stable of cartoonists. You would, for example, find plenty of the work of cartoonists for Chicago Tribune, Chicago Daily News, Chicago Post, Chicago Inter-Ocean, or Chicago Journal, but nothing that appeared in Hearst's Chicago Examiner. I don't know whether that was by Mr. Windsor's editorial preference, or if Hearst's publishing empire did not make those cartoons available.

The June, 1921 issue of Cartoons Magazine, published in May of that year, would be the last under that title. For several months, its issues had featured short works of fiction or light essays toward the front of the magazine, always illustrated with cartoons drawn specifically for them. Political cartoons were still predominant, but it had been a while since an adaptation of one had appeared on the front cover.

With the July, 1921 issue, Cartoons Magazine merged with Wayside Tales. The editor's note explained the changes to come:

"To our readers: Beginning with this issue, CARTOONS MAGAZINE makes its appearance as CARTOONS MAGAZINE AND WAYSIDE TALES. The best cartoons of the month will appear as before, with the running whimsical comment which has distinguished our pages in the past. In addition to the cartoon feature, however, the magazine under its new title will offer entertainment in the form of popular fiction by the best writers of the day. Romance, adventure, humor, mystery — these themes will constitute the new menu which we will serve our readers. Each issue will contain one serial by a popular novelist, one complete novelette, and a number of short stories, as in the present issue. — The Editor."

The table of contents made it clear which half of the magazine title came first inside, in spite of its placement and font size on the front cover. 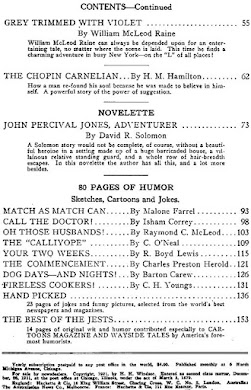 So for August, they fixed the cover.

Editorial changes went further than as described by the Editor's Note. Topical cartoons remained, but political cartoons completely disappeared. There was not one cartoon about the new administration, about Democrats or Republicans, about immigration, or about Yap, Germany, Ireland, Armenia, or Mexico. Probably the closest thing to controversial cartoons were the ones about Sunday Blue Laws that I brought you last week.

With the January, 1922 edition, "Cartoons Magazine" disappeared from the title entirely. There were still drawings and cartoons inside, and a dozen advertisements aimed at aspiring ink-slingers; but the "80 Pages of Humor" had been whittled down month after month to only 40 pages.

Editorially, all that was left of Cartoons Magazine in the February issue was ten pages of "Best of the Jests." The final edition of the magazine was the May, 1922 issue.