Q Toon: Out of the Closet, Into Reprise 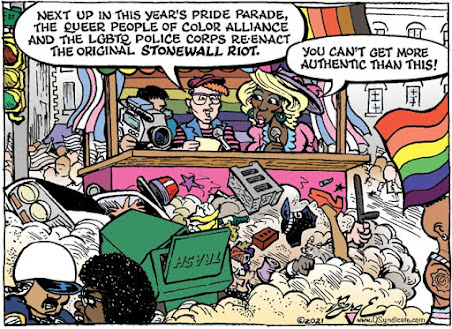 Pride festivals and parades are back in 2021, after last year's forced hiatus in many communities. With them has come the insistence by various organizations of People of Color that law enforcement be banned, either as security or participants.

New York's Pride organizing committee, Heritage of Pride, has told that city's Gay Officers Action League that they are not welcome to participate in this year's events, or to come within a city block of the event perimeter.

NYC Pride seeks to create safer spaces for the LGBTQIA+ and BIPOC communities at a time when violence against marginalized groups, specifically BIPOC and trans communities, has continued to escalate. The sense of safety that law enforcement is meant to provide can instead be threatening, and at times dangerous, to those in our community who are most often targeted with excessive force and/or without reason. NYC Pride is unwilling to contribute in any way to creating an atmosphere of fear or harm for members of the community. The steps being taken by the organization challenge law enforcement to acknowledge their harm and to correct course moving forward, in hopes of making an impactful change.

Effective immediately, NYC Pride will ban corrections and law enforcement exhibitors at NYC Pride events until 2025. At that time their participation will be reviewed by the Community Relations and Diversity, Accessibility, and Inclusion committees, as well as the Executive Board. In the meantime, NYC Pride will transition to providing increased community-based security and first responders, while simultaneously taking steps to reduce NYPD presence at events.

Heritage of Pride members soon reversed that decision, only to have the reversal re-reversed by HoP's executive board.

Jonathan Capehart in Washington Post quotes Richie Jackson, activist and author of Gay Like Me: A Father Writes to His Son, who agrees with Capehart that HoP made a bad call:

“For one thing I hate seeing us use a tactic so often used against us. Our community has no litmus test for entry and we shouldn’t start now. All are welcome — proud, shameful, closeted — all,” Jackson told me via text message. “But now we are also taking away something from LGBTQ kids. They won’t be able to see the cops marching, to see that occupation as a place for them. We’re robbing them of possibility.”

(Capehart is a Person of Color; Jackson is not.)

It's difficult to know whom to side with in this debate. As Capehart acknowledges, "The decision came in response to understandable, long-brewing anger at the NYPD among many LGBTQ people — including growing outrage over the heavy police presence at the pride parade and concern about people of color bearing the brunt of police action. Last June in Lower Manhattan, for instance, officers pepper-sprayed participants in the Queer Liberation March for Black lives and against police brutality."

Yet it also puts spokespersons for the LGBTQ+ community in the position of having to advocate for tolerance and inclusion from society at large while imposing a policy of intolerance and exclusion within our own. Although some, such as J. Brian Lowder at Slate, pooh-pooh cops' complaints, saying that they "can still participate as an individual, just without [their] uniform." That comes off sounding uncomfortably like "Don't Ask, Don't Tell" to me.

This issue is not unique to New York by any means, nor is it new. Twin Cities Pride banned police uniforms three years ago, as did Washington D.C. Capital Pride Alliance. Pride committees in some larger Canadian cities banned uniformed police in 2017.

I know people on both sides of the cop/PoC divide, and I think police departments ought to be commended when they reach out both to the LGBTQ+ community and to People of Color communities.

Side note: a neighbor was recently appointed as her police department's official LGBTQ+ liaison. Comments in the department's Facebook announcement were riddled with such snark as this: "Spending taxpayer dollars on a pointless exercise in virtue signaling to the wokesters is embarrassing." The role adds a title to her workload, but no more "taxpayer dollars" than she had been earning in her role as a police lieutenant the week beforehand. But it just goes to show that there are plenty of Persons of No Color Or Sexual Persuasion who object to law enforcement outreach of any kind.

That same police department is actively engaging with the PoC community in weekly meetings right where I work, with the active involvement of the current Acting Police Chief. They do a lot of personal self-defense training, but they also sit down to address specific incidents and concerns. (Faithful readers will recall that I work in a neighborhood directly affected by rioting last summer.)

As a Person of No Color myself, I probably don't get to decide when specific police departments have done enough to satisfy PoCs. Nor can I expect that change will take place quickly, without resistance, or uniformly around the country.

So let's just hope that relations have improved by 2025.