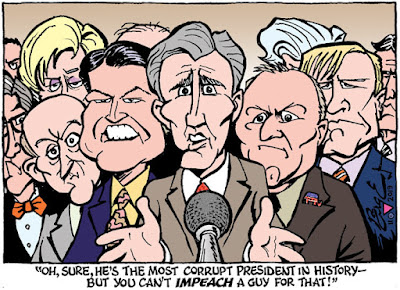 Republicans in the House have spent a lot of time and energy protesting against the process of the impeachment proceedings against Donald Berzilius Trump.

And none, much to Trump's consternation, protesting his innocence.

In Trump's eyes, he has done nothing wrong. This is just the way he has always been able to do business: surrounded by yes-men who will carry out his least little wish, and he'll fire the first one who asks whether something might be illegal, unethical, or unfair.

Republicans, many of whom come from the business world, understand this kind of thinking. Why worry about the law when you can just buy enough legislators to get yourself a loophole? Why not cut corners on your new jet airplane or bribe doctors to push your highly addictive pain-killer when you've got to get those profits up over last year, year after year; and your pockets are deep enough for your fleet of lawyers to wait out anybody who might sue.

That is, if those lawyers haven't already come up with 70,000-word Terms Of Service agreements requiring consumers to hold you harmless no matter what negligence or malfeasance you figure you have every right to get away with.

Never mind those pesky pension plans! Retirees are not profitable, so screw 'em. Just like any contractor who has finished work on a Trump project. Or any city that has hosted a Trump rally. Or the Kurds.

As long as the guy at the top appears to be making a profit, everybody ought to be happy. And doesn't the economy appear to be doing just fine?
Posted by Paul Berge at 5:30 AM