"Judges are like umpires.... I will decide every case based on the record, according to the rule of law, without fear or favor, to the best of my ability, and I will remember that it’s my job to call balls and strikes, and not to pitch or bat." —John Roberts, at his Supreme Court confirmation hearing, September 12, 2005 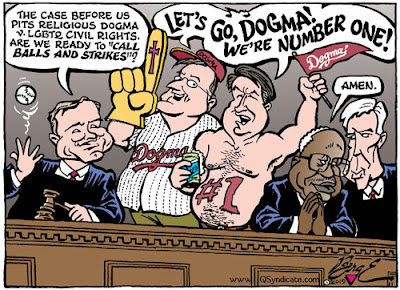 Brian Brown, the president of the antigay National Organization for Marriage and World Congress of Families, recently tweeted a photo of himself and and leaders of the Catholic Church's Congregation for the Doctrine of Faith posing with Supreme Court Justices Brett Kavanaugh and Samuel Alito.

Since the Supremes have taken up three LGBTQ+ rights cases this year, a liberal advocacy group, Take Back the Court, is demanding that Kavanaugh and Alito recuse themselves from them.


The Supreme Court has become deeply politicized in recent years, thanks to a series of rulings like Shelby County v. Holder, Citizens United, and Rucho v. Common Cause that have undermined basic tenets of our democracy for partisan advantage. The successful and unprecedented efforts by political branches to manipulate the size of the court for partisan purposes and your behavior, Justice Kavanaugh, during your confirmation hearings, have only deepened concerns about the politicization of the court. Your decision to meet privately with an activist who has filed amicus briefs with the court in three pending cases seems to confirm the worst fears of his critics.

The public letter from Take Back the Court director Aaron Belkin concludes:


The credibility and impartiality of the current Supreme Court is in tatters. Posing for photographs with the president of an advocacy organization that has filed briefs in matters pending before the court makes a mockery of Chief Justice Roberts’ assertion that a judge’s role is to impartially call balls and strikes. If you refuse to recuse yourselves, this incident will further illustrate the urgent need for structural reform of the Supreme Court in order to restore a Court that understands its role is to protect individual rights and our democracy.

Brown's NOM has filed amicus briefs in the cases before the Court, urging the Justices to rule that employers have every right to discriminate against LGBTQ+ employees, applicants, and customers. Given how nominees to the Court these days bend themselves into human pretzels trying to avoid answering any question that might someday be relevant to a matter before the Court, it is at least curious that Kavanaugh and Alito would choose to grant such an ex parte photo op.

Recusals of Supreme Court Justices are not so uncommon as you might think. Justice Elena Kagan recused herself from dozens of cases — 28 in her first year on the Court — because as Solicitor General, she had been counsel in some of the litigation of those cases. Sandra Day O’Connor removed herself from cases regarding telecommunications firms because of stocks she owned. Clarence Thomas recused himself from United States v. Virginia because his son was enrolled at The Virginia Military Institute.

Whether and how Thomas's wife's work as a conservative activist impacts his supposed judicial impartiality is a whole other issue; in his three decades on the Court, he hasn't recused himself from any LGBTQ+ cases to my knowledge.

After all, Thomas, Alito, Kavanaugh, and for that matter Neil Gorsuch and John Roberts were put on the Court to be conservative judicial activists. The Vast Right Wing Conspiracy has been determined to load state and federal courts with their loyal soldiers since Nixon was president, such as Lawrence VanDyke, whom I drew about last week.

If they recused themselves from every liberal v. conservative case, they wouldn't be doing the job they were trained, groomed, and hired to do.
Posted by Paul Berge at 7:32 AM