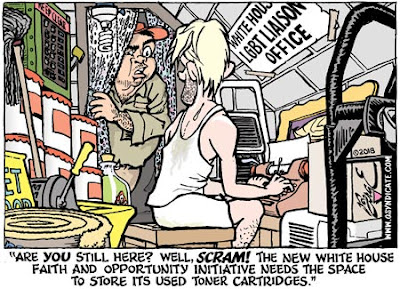 Last week, Donald Joffrey Trump signed an executive order formalizing the creation of what he is calling a Faith And Opportunity Initiative. In essence, the initiative legalizes — and gives federal blessing to — discriminatory actions by anyone who claims to act in keeping with "deeply held beliefs".


But if those last three words—“deeply held beliefs”—sound familiar, it’s because they are often used to justify anti-LGBT legislation in the name of “religious freedom.” Indeed, LGBT advocates say that the executive order is yet another federal action that could potentially encourage discrimination against LGBT people in the name of religion.
“We’re very concerned because this administration has a pattern of inviting discrimination in the name of religion,” Camilla Taylor, director of Constitutional Litigation for the LGBT legal advocacy group Lambda Legal, told The Daily Beast shortly before the Rose Garden event.
Based on its reported description, Taylor said that the new “faith initiative” seems to be “actively seeking out opportunities to facilitate discrimination.” (As details of the order were officially announced minutes later, Lambda Legal tweeted, “Yikes, y’all.”)

Now, I'm sure there's some Log Cabin Trump Loyalist out there who is saying, "Oh, you're just getting worked up about nothing. Didn't he promise 'I will fight for you while Hillary brings in more people who will threaten your freedoms and beliefs'? Didn't he say, 'I will do everything in my power to protect our LGBTQ citizens'? Didn't he wave a big ol' rainbow flag?"

Yes, yes he did. As usual, he was lying, and he held the flag upside-down.

Obsessive students of my cartoons (or at least the four or five of you who've seen the Bergetoons Facebook page lately) might possibly recognize the office of the White House LGBT Liaison from a cartoon I drew last year. There was concern at the time that Trump had not named a White House LGBTQ Liaison to replace the Obama administration's WHLGBTQL Raffi Freedman-Gurspan, and the WHLGBTQL web page had gone blank.


“Part of my job was to talk to community leaders who were bereaved and ultimately be the voice of the president,” [Raffi Freedman-Gurspan] recalled in an interview with BuzzFeed News during her last week on the job, “passing along word that the president [Obama] was very, very, very concerned.”
...

Marsha Scott, a straight woman, was the first White House liaison to gays and lesbians, named to the role by President Clinton in 1995. But the position disappeared when George W. Bush took office and later returned under Obama. Aditi Hardikar held the position until leaving to join Hillary Clinton’s campaign.

There is still no WHLGBTQL, and still no web page.

But lest you think for a moment that the Corrupt Trump Administration policy toward LGBTQ citizens has been one of benign neglect, its record has been one of active hostility.

Take the Department of Health and Human Services (please):


The nation's health department is taking steps to dismantle LGBT health initiatives, as political appointees have halted or rolled back regulations intended to protect LGBT workers and patients, removed LGBT-friendly language from documents and reassigned the senior adviser dedicated to LGBT health.
...
The Trump administration soon after taking office also moved to change the agency's LGBT-related health data collection, a window into health status and discrimination. [In January] it established a new religious liberty division to defend health workers who have religious objections to treating LGBT patients.

The religious right-wing is not just demanding special rights for florists and wedding photographers to discriminate against us. If there are health care workers who have religious objections to treating any of their patients, I think their employer should have every right to remove them from the possibility entirely. I don't want my EMT or emergency room doctor deciding I should wait for a better Samaritan to happen by. 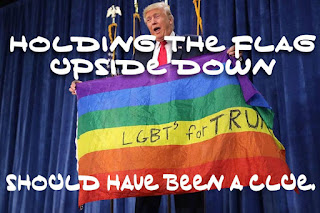 P.S.: Homophobia is the Corrupt Trump Administration policy at the Small Business Administration, too.
Posted by Paul Berge at 8:00 AM