Neither Donald Trump nor Roseanne Barr have anything to do with this week's cartoon, so most of you may require a bit of explanation.

On May 16, fifteen-term Republican Congressman Dana Rohrabacher told a delegation from the Orange County Association of Realtors that “Every homeowner should be able to make a decision not to sell their home to someone [if] they don’t agree with their lifestyle.” 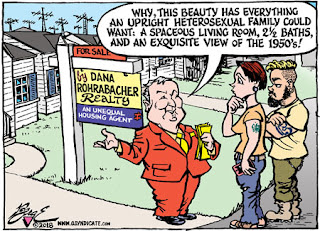 The National Association of Realtors' lobbying and campaign arm has been a strong backer of Rohrabacher in the past, but once his remarks were made public by a former Orange County Realtor president, the NAR announced withdrawal of their support.


“It was determined that Rep. Rohrabacher will no longer receive support from National Association of Realtors’s President’s Circle,” an association statement said, referring to its list of recommended candidates. Rohrabacher’s stance, the 1.3-million-member trade group said, is contrary to NAR’s code of ethics, which bans discrimination on the basis of “sexual orientation or gender identity.”
Previously Rohrabacher had been designated as a “Realtor Champion,” eligible for support from top Realtor donors.

Rohrabacher has a long anti-LGBTQ record. He voted to keep the military Don't Ask, Don't Tell policy, and consistently against workplace protections for LGBTQ citizens. He repeatedly voted for the Defense of Marriage Act and the Federal Marriage Amendment to the Constitution to exclude same-sex couples from the right to marry. Having lost that fight, he has advocated not having federal recognition of any marriages whatsoever.

Six Republicans, four Democrats, a Libertarian and an independent are running against Rohrabacher this fall. (Four other candidates will appear on the primary ballot, although they have unofficially withdrawn from the race.) It's a strongly Republican district, but given California's electoral system in which the top two vote-getters in a general primary, regardless of their party affiliation, face off against each other in the general election, anything could happen.

Still, I strongly suspect that the shtick Mr. Rohrabacher has been selling in southern California since the 1980's will meet growing skepticism from the voters born since then.
Posted by Paul Berge at 7:20 AM