Leafing through the Sunday comic pages of the Kenosha-Racine News-Journal-Times today, I noticed that "Macanudo" by Liniers had been replaced by Brad Anderson's "Marmaduke."

I hadn't seen any notice that the combined newspapers, printed way off in Indiana, were dropping "Macanudo," so I dug last Sunday's comic page out of Dad's recycling box to check whether Linier's comic was in it. It was... 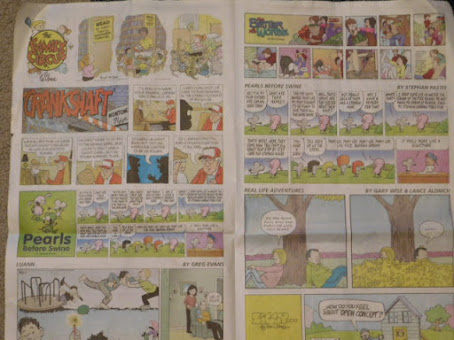 ...but the odd thing in the October 17 edition was that Stephan Pastis's "Pearls Before Swine" was included twice.

Are they just getting careless at Lee Enterprise's print factory in Munster, or are they intentionally trying to find out what changes they can get away with without their aging readership raising a fuss?

The "Pearls" on the left page above took the place of the late Charles Schulz's "Peanuts"; I'm guessing that even in reruns, "Peanuts" still appeals to more of the over-80 crowd than Stephan Pastis's elaborate, boomer-centric puns.

As for "Macanudo," it's a cartoon that often puzzles Dad, and my mother never liked at all. The Journal Times ran "Marmaduke" for years before Lee started publishing one comics page for both the Racine and Kenosha newspapers, so most older readers were quite used to it. (I don't remember whether "Marmaduke" had previously been in the Kenosha News.)

Dad hadn't noticed the switch today; he's much more aware of when the crossword puzzle has been a repeat.

Is anyone complaining? I don't know, and I'm not going to check.

I've been to the Journal Times comments section before, and man, you really do not want to get caught in that cesspool.