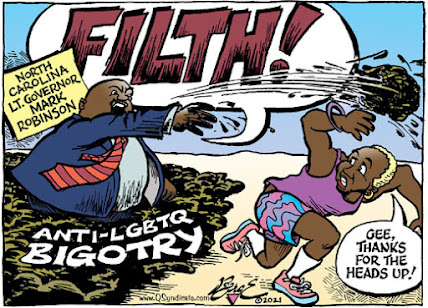 Jon Gruden may be gone, but Mark Robinson, the Lieutenant Governor of North Carolina, is not backing down from incendiary remarks against the LGBTQ+ community. Last Tuesday, People for the American Way's Right Wing Watch Project posted video of a political sermon Robinson had delivered at Asbury Baptist Church in Seagrove back in June:

“There’s no reason anybody anywhere in America should be telling any child about transgenderism, homosexuality, any of that filth,” Robinson says. “Yes, I called it filth. And if you don’t like it that I called it filth, come see me and I’ll explain it to you.”

Continuing his tirade at Upper Room COGIC in Raleigh in August, Robinson called transgender rights "demonic," and that any discussion of it in schools is "dragging our kids down into the pit of Hell."

If anti-LGBTQ bigotry were Robinson's only fault, the Charlotte Observer might not have described his views as "cringeworthy" and "an embarrassment." On other subjects, he has claimed that the movie Black Panther was "created by an agnostic Jew and put to film by [a] satanic Marxist" that was "only created to pull the shekels out of your Schvartze pockets"; called former President Obama "a worthless, anti-American atheist"; and charged that COVID-19 was a "globalist" conspiracy to defeat Donald Trump.

Robinson is a Republican, which, if you've read this far, should hardly come as a surprise. The Governor, Roy Cooper, is a Democrat, which would make for some strained relations between their offices even if Robinson weren't such a crazed demagogue. Republicans criticized Cooper earlier this year for not mentioning newly elected Robinson, the state's first African-American Lt. Governor, in his State of the State address.

The recent shenanigans in Idaho demonstrate why our country's founding fathers quickly switched to having President and Vice President run together on the same ticket (originally, the presidential candidate who came in second got to be Veep as a consolation prize). Having the top two executive officers working at cross purposes is a recipe for mischief and instability.

According to the state website, North Carolina's Lt. Governor does get to take over the Governor's duties in the event of the Governor's "absence, death or incapacitation."

One hopes that Governor Cooper keeps his executive order stationery locked up, and a very secure computer password set up, whenever he ventures across state lines.