The Pulitzers Draw a Blank

We editorial cartoonists have had our collective nose out of joint all week over a snub by the Pulitzer Prize Board, which announced that it would not award a Pulitzer Prize for editorial cartooning this year. They named a three-way tie for Honorable Mention among Ken "Tom the Dancing Bug" Fisher, Lalo Alcaraz, and Marty Two Bulls Sr., but no winner.

Like 2020, 1972 was a very eventful year, with plenty of excellent cartoons the Pulitzer board might have considered. I was only just beginning to appreciate editorial cartoons myself in 1972, but I offer here a sampling of what the judges might have had before them when considering the Best Editorial cartoon award for that year.

These cartoons don't include all of the best cartoons, or certainly best cartoonists, of the day; I've tried to approach this with the mindset of a theoretical Pulitzer judge, so the emphasis is on Most Important Issues rather than Funniest Gags. I therefore offer apologies up front to the cartoonists I have included and to those I have not.

The war in Vietnam was perhaps the biggest news story in American media throughout 1972, so there were plenty of very good cartoons about it. Take for example this Bill Sanders cartoon, quoting Richard Nixon announcing U.S. escalation of bombing North Vietnam.

Pat Oliphant won a Pulitzer in 1967 for a cartoon drawn specifically with the Pulitzer committee in mind, and which he considered then and now one of the worst cartoons he has ever drawn. From that point forward, he has boycotted the Pulitzer Award Game; but if he hadn't, the committee might have considered this excellent cartoon:

In Oliphant's absence, the committee might have considered this cartoon in a similar vein by Jules Feiffer:

The war wasn't the only major event of the year, of course. President Nixon's state visit to the People's Republic of China was a game changer in geopolitics.

And, of course, there was a presidential election, and a third-degree burglary at the Watergate Hotel in Washington D.C. 49 years ago this week that ended up making a bit of news.

It's almost unfair to include Herblock for consideration. By 1972 the Dean of American Editorial Cartoonists, Herblock had already won two Pulitzers, in 1942 and 1954. Likewise, it's probably unfair to include John Fischetti, the 1969 honoree.

The Pulitzer committee has lately shied away from cartoons about individual U.S. politicians (which disqualifies all the above cartoons), but there were more general observations about the election which might have caught their attention.

Democratic candidate George Wallace of Alabama was shot while campaigning for the presidency. While his injuries would not prove fatal, the attempted assassination was less than a decade after the assassinations of John and Robert Kennedy and Rev. Dr. Martin Luther King, Jr., seeming to augur political murder as becoming the norm. Thankfully, it has remained the exception, not the rule.

On a lighter note, perhaps Hugh Haynie's observation of a generational shift in political involvement would have swayed more optimistic judges.

But when one turns to global issues, any rose-colored glasses again turn blood red. Terrorism on behalf of the Palestinian cause spilled out from the Middle East, as eleven Israeli athletes were murdered by Black Septembrists at the Munich Olympics. Earlier in the year, thirteen unarmed civil rights demonstrators were shot dead by British Army paratroopers on "Bloody Sunday" in Londonderry, Northern Ireland.

Other, more generalized issues of the day which might have interested the Pulitzer folks included pollution, drug use, the cost of living, or, for the same reason that the Oscars love films about movie making, freedom of the press.

I'm obliged to point out that the Pulitzer committee stopped giving awards for specific cartoons in 1976, having begun in 1964 awarding a cartoonist for his or her entire output for the year. (Tony Auth's 1975 cartoon is somewhat of an outlier; otherwise the last award given to a specific cartoon was that given in 1967 to Pat Oliphant. In 1990, the award to Tom Toles did cite a specific cartoon, but only as "exemplifying" his body of work.)

I must also note that just because the Pulitzer committee doesn't give out an award in a particular year does not necessarily mean that the judges didn't find any work worthy of their consideration. It can also mean that there was a hung jury — that none of the pieces under consideration could garner support of over half of the Pulitzer board.

And, as Poynter points out, it doesn't just happen to us cartoonists.

I'm not an insider, so I don't really know how the Pulitzer committee works when there isn't a majority vote winner. With so many categories, they obviously don't fight it out for hours like Twelve Angry Men; and I hope they don't operate like the U.S. Senate, allowing one person to thwart a vote by merely threatening to filibuster everybody else.

Yet somehow, the committee managed last year to ignore the three editorial cartoonists nominated by a jury of their peers, coming up with New Yorker cartoonist Barry Blitt instead. The committee similarly passed over finalists to award non-finalists in 1979, 1987, 1990, 1996, and 1998. Apparently there must be some degree of back and forth negotiating behind those Pulitzer doors.

In view of all this, I guess this year's Pulitzer decision isn't as insulting to our profession as many of us initially took it to be. At least, that is, compared to those occasions when the Pulitzer folks passed over the finalists to give Best Editorial Cartoonist to a non-editorial-cartoonist.

Do you think Barry Blitt or Berkeley Breathed even paid that $75.00 entrance fee? 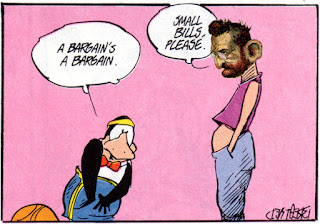