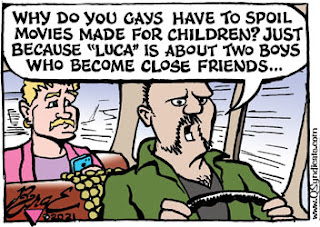 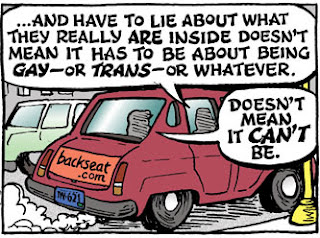 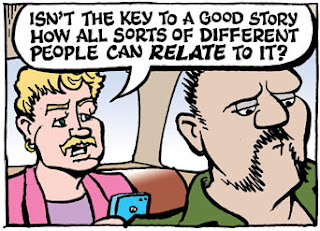 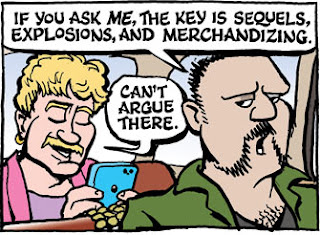 Apparently, there is a school of thought that Disney-Pixar's latest film, "Luca," is an allegory about growing up gay.
In case you haven't seen the ads, it's an animated flick in which the titular character is a boy sea-monster — a merboy, I guess — who hops up on land and assumes the form of a human boy. He meets up with Alberto, a fellow disguised merboy, and they become best friends. They have to hide their true identity from the other residents of the small Italian town where they hang out, because everyone there is afraid of sea monsters. On top of that, Luca's parents think this other boy is a bad influence on Luca and forbid their son from seeing Alberto any more.
I hope it isn't spoiling the ending too much (and you can skip to the next paragraph if you think it will be) to add that the climax involves coming out to the townspeople.
The film's director, Enrico Casarosa, who is straight, denies that there is a gay subtext, saying that the story is based on his own childhood in Genoa. I guess he's letting us know that underneath it all, he's really a sea monster.
Before the days of "In & Out" and "La Cage au Folles," LGBTQ+ movie-goers had to settle for reading gay subtext into straight-based movies, whether it was there or not. Or focusing our attention on the central character's Gay Best Friend. Or subjecting ourselves to LGBTQ+ dramas in which somebody always dies in the end.
So anyway, many of us set our gaydar on high beam when it comes to Bert and Ernie, Batman and Robin, Laverne and Shirley, or Marcie and Peppermint Patty. It hardly matters whether or not a deeper relationship was intended than their creators had in mind. The deeper relationship is possible, and if it helps someone identify with the characters, isn't that to the creator's credit?
________
P.S.: I made sure that nobody was actually using the URL on the back of that dotcomtaxi. It better not have been registered to a porn site since Sunday!
Posted by Paul Berge at 6:24 AM

Email ThisBlogThis!Share to TwitterShare to FacebookShare to Pinterest
Labels: Movies