Q Toon: It Was On His To-do List for the Second Term 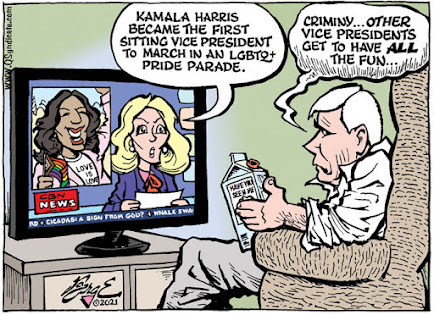 Even though I've already drawn two cartoons about LGBTQ+ Pride this year, acknowledgement had to be made of Vice President Kamala Harris marching in Washington D.C.'s parade over the weekend. Participating in a Pride parade adds to Harris's ever-growing list of vice presidential Firsts.

It had to be orders of magnitude more fun than meeting with Presidents of Guatemala and Mexico to discuss our problem with Latin American immigration, then being harangued on right-wing media for not having tossed in a photo op with Trump's Ugly Border Wall.

As we know from Veep and The West Wing, Vice Presidents get stuck doing all the sh¡tty jobs that the guy behind the Oval Office desk would rather not handle himself. Biden has been there and knows the drill. So, too, has Mike Pence, who had to suffer the added indignity of dodging a lynch mob sent by his president.

Pence probably wouldn't have wanted to walk in an LGBTQ+ Pride parade, but he would have gone if Trumplgruber had told him to. As it was, the most enjoyable thing he ever got to do as vice president for four years was attend a Colts-49ers game just so he could stalk out before the coin toss.