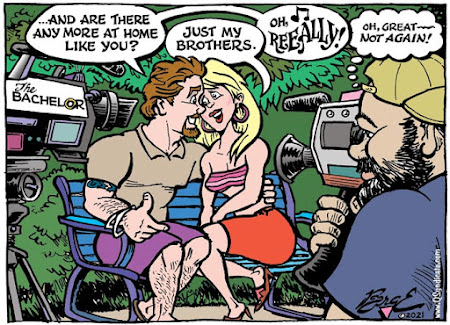 After so many weeks cartooning about the right-wing assault on transgender Americans, and a week that saw a mass shooting just about every day, I felt the need to draw a little fluff for a change.

A recent contestant on ABC's The Bachelor, Colton Underwood, came out as gay last week. The former NFL linebacker (Chargers, Raiders, Eagles) had previously been one of the bevy of male contestants on The Bachelorette before becoming the focus of The Bachelor's season 23. In case you're unfamiliar with the franchise, there's a houseful of people who are the opposite sex of the season's bachelor/ette, who goes on a series of dates with them and winnows them down to a final, er, winner.

The object of the game is supposedly matrimony, which is as bad an idea as has ever emerged from a producers' brainstorming session. (The two shows nevertheless have a combined 42 seasons between them.) Happily, Underwood's star turn did not result in wedding bells, although there was a restraining order involved.

We all come to grips with our sexuality at our own pace and on our own terms. Some people make and embrace the realization in childhood, while others do so only later in life. There are still, moreover, a wide variety of pressures to deny oneself, whether from church, family, or the locker room, so I don't wish to second guess Mr. Underwood's choices.

His choice now to share the reorientation of his life on a Netflix series seems ill-advised, I suppose; but on the other hand, famous people don't get the luxury of coming out quietly — what say you, Ellen DeGeneres, Greg Louganis, Lance Bass, Kaitlyn Jenner, Elliot Page?

Besides, the phenomenon of newly out LGBTQ+ going kind of overboard in the process is fairly well known, even without the celebrity factor.

Of all the other LGBTQ+ celebrities, activists and mavens who have had anything to say about Underwood, whether supportive of his coming out or attacking him for "monetizing" his experience, perhaps the most insightful was 1990's NSYNC heartthrob Bass, who told the Daily Mail,

"So when someone comes out as a public figure, so many people immediately go, 'It's too late.' They don't like to support it because they don't feel like you know what you're talking about yet.

"But I don't think Colton is trying to lead that charge of trying to be the spokesperson for the LGBTQ community." Lance, 41, added.

So perhaps ABC could sign him up for a same-sex season of The Bachelor instead.