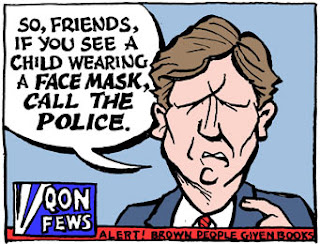 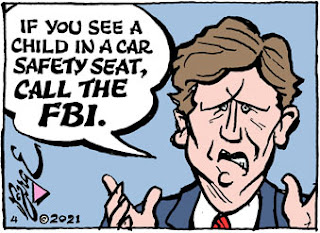 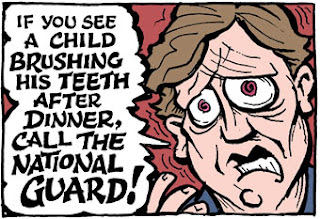 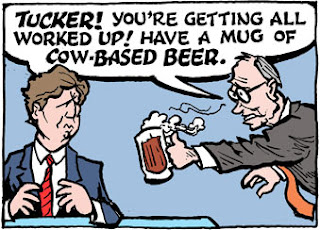 It is nearly impossible to satirize the level of desperation at Fox News.
This week, they got caught lying about President Biden's putting America on a vegan diet, and about every immigrant child receiving Vice President Harris's book as a welcome gift.
Then, perpetually perplexed Tucker Carlson actually urged his viewers to report to the police any children wearing protective masks in public. Because, I guess, the police don't get in enough trouble responding to non-emergency calls.
No, it's because COVID-19 is safe and effective, and has been since Easter of last year, just like our Trump and Savior promised it would be. Or something like that. Anyway, as any parent knows, you can't catch diseases from children.
It's masks that are dangerous. Them and vaccines.
✍
In my inked version of this cartoon, I had Larry Kudlow offering Tucker Carlson a "bacon-based beer," but I decided I had better change it in Photoshop.
I've watched enough episodes of "Chopped" to know that someone has undoubtedly produced and sold a beer made with bacon.
And some Connor Sewer undoubtedly buys it.
Posted by Paul Berge at 4:29 AM