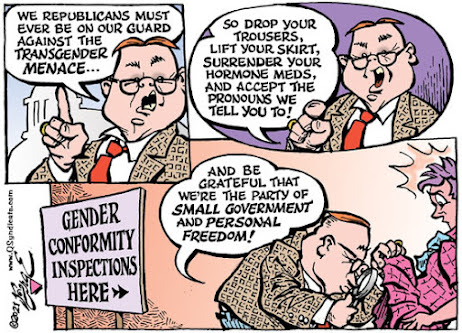 I wouldn't keep harping on this subject if Republican state legislators all across the country weren't so doggoned dogged in their persecution of transgender persons. It is as if there were some tightly-run conspiracy coordinated out of the basement of a Colorado Springs pizza parlor, zealously followed by minions from Maine to Montana.

According to data from the Human Rights Campaign, one of the nation's largest LGBTQ advocacy groups, at least 117 bills have been introduced in the current legislative session that target the transgender community. It's the highest number the organization has recorded since it began tracking anti-LGBTQ legislation more than 15 years ago.
The majority of bills would affect transgender youth, a group that researchers and medical professionals warn is already susceptible to high rates of suicide and depression.

Punitive anti-transgender legislation has already become law not only in Arkansas, but also in Alabama, Missisippi, and Tennessee, and enacted into law by executive order by South Dakota Governor Kristi Noem. And it doesn't stop there. 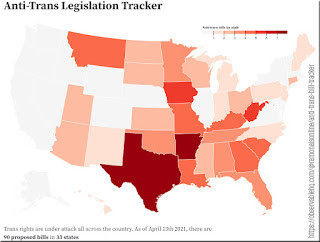 This legislation targets everything from transgender youth participation in sports to hormone therapy treatment — banning both. I think you could even include Republican efforts to restrict voting rights: iinsisting upon deadnaming (or dead-signaturing, or dead-photo-IDing, etc.) transgender voters effectively disenfranchises them.
I suppose there must be a transphobic Democrat or two in somebody's state legislature, but anti-trans policy is overwhelmingly a priority of Republicans. Here in Wisconsin, our Republican legislature may well pass the "Protect Women in Sports Act" authored by Rep. Barbara Dittrich (R-Oconomowoc), but it's unlikely to get past Democratic Gov. Tony Evers's veto. In Maine, Rep. Beth O'Connor (R-Berwick) has submitted a nearly identical bill, but there is no chance of that legislature's Democratic majority or Gov. Janet Mills approving it. 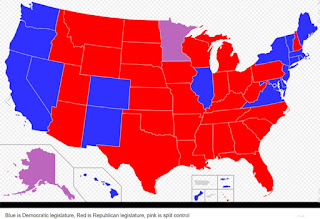 This map from Wikipedia shows that Republicans control 30 of the 50 state legislatures in this country (and half of the chambers in two more). Of those, only Kansas, Kentucky, Louisiana, Michigan, North Carolina, Pennsylvania, and Wisconsin have Democratic governors potentially standing in the way of anti-trans legislation.

All of those governors are either up for reelection next year or term-limited shortly thereafter.