What Is So Rare As a Cartoon in June?

For Smatteringback Saturday today, I'm rehashing a handful of my own cartoons from Junes of ten, twenty, thirty, and omigod forty years ago.
Back in 1980, I didn't have cartoons published outside of the regular school year, so this cartoon never saw print; but I've run it twice on this here blog, so all its tedious shading hasn't been for naught. A college student's youthful idealism allowed me to imagine that independent presidential candidate John Anderson had any chance of being sworn into office on January 20.
Ten years later, I was drawing local issue cartoons for the Racine Journal Times and cartoons on more general topics for a couple University of Wisconsin newspapers. The local issue above concerned Racine's major shopping center, Regency Mall, and its developers' insistence that there not be a bus stop at any of its doors. In their thinking, convenient bus stops would invite riff-raff from the inner city (oh but don't you dare think they were talking about persons of color); shoppers and employees complained of having to walk — especially in winter — from the roadway that circles the perimeter of the parking lot.

In those days, Regency Mall bustled year 'round, with shoe stores; specialty clothing shops for men, women, and children; half a dozen jewelry stores; a couple of bookstores and two music stores; and anchors J.C. Penney's, Sears, Boston Store, and Prange's.

Today, almost all of that is gone. The remaining jewelry stores, discount clothing shops, exercise gym, and fast food joints are widely separated by vacancies covered over with mural-sized historical photographs of Racine.

The failure of the mall had nothing to do with moving the bus stops to the inner ring drive.

A huge issue for Republicans in 1990 was stopping protesters from burning the U.S. flag — which only made protesters want to do it more often. Upholding a similar decision the previous year, the Supreme Court ruled 5-4 in U.S. v. Eichmann on June 11, 1990 that flag-burning was protected by the First Amendment. "Punishing desecration of the flag dilutes the very freedom that makes this emblem so revered, and worth revering," wrote archliberal Justice William Brennan in opinion, joined by archconservative Justice Antonin Scalia. Republicans campaigned to amend the constitution to overturn the court's decision. Congress voted on the proposed amendment six times between 1995 and 2006, but it has always fallen short of the necessary 67 votes in the Senate.
Let us now jump ahead to 2000, by which time I had begun drawing LGBTQ-centric cartoons for Q Syndicate. I had a few particular members of the clergy in mind when I drew this June cartoon about the way certain liberal religious folk were trying to ride their camel through the eye of the needle between accepting same-sex marriage and being "welcoming." But this pastor does not physically resemble any of them.
Also in June, 2000, there was speculation that Reform Party presidential candidate Pat Buchanan might tap talk show host Dr. Laura Schlessinger to be his running mate. I'm not sure what "Dr. Laura," who called homosexuality "a biological error" and claimed that "a huge portion of the male homosexual populace is predatory on young boys," would have added to the ticket when Buchanan's antigay animus was already firmly established. In the end, she wasn't interested in running for Vice President anyway, but I certainly enjoyed drawing this cartoon.

If you can name Pat Buchanan's 2000 running mate without looking it up, congratulations. You are either the world's wonkiest politics geek, or you've been dead for two years.

Meanwhile, one of the other candidates that year decided that the United States just doesn't have enough federal Christian holidays. 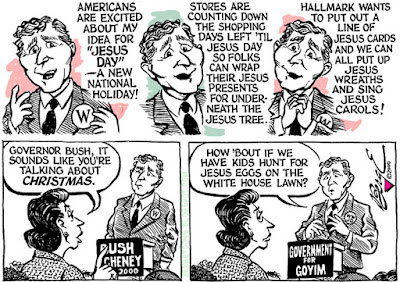 I can't remember whether I drew that cartoon for Q Syndicate, or if it only ever appeared on my old GeoCities page. At this point, it's difficult to check which; although, since there isn't any explicitly L, G, B, T, or Q subject matter, it's probably the latter. It certainly wasn't in the Milwaukee Business Journal.
Finally, here's a cartoon from June of 2010 just for schitzengigels and because it didn't make the cut for my look back at Pride cartoons a couple weeks ago.
Posted by Paul Berge at 2:02 AM