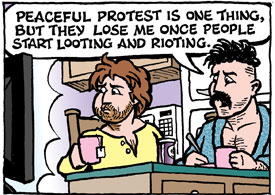 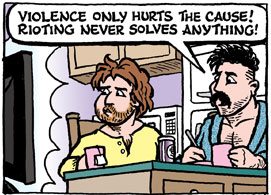 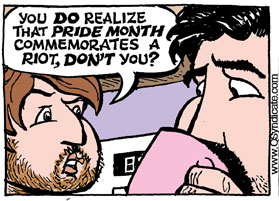 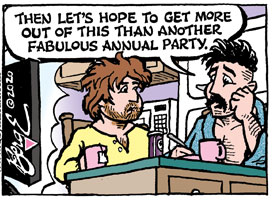 I struggled with this week's cartoon.

Having seen the police torture and execution of George Floyd, I completely understand the frustration and rage of the Black community who have complained loud and long of police officers to whom Black Lives Do Not Matter.

I'm not old enough to remember Stonewall, but I do remember the righteous anger of the LGBT community after a jury acquitted police officer Dan White of the cold-blooded murders of Harvey Milk and Mayor Dan Moscone.

But I just couldn't bring myself to draw a cartoon giving my blessing to mob violence.

Hell, I worry enough about the peaceful protesters shouting and singing and not keeping six feet apart. I've been posting here lately about the danger to public health from taverns and churches opening too soon, MAGAlomaniacs screaming at Michigan police, and Madison Republicans forcing all of Milwaukee to crowd into five polling places on election day in the middle of a pandemic. The whole mess must be giving Dr. Fauci a lot of sleepless nights. 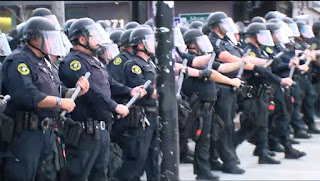 These folks in Milwaukee shouting "Move! Back!" and advancing at the protesters up the street yesterday afternoon weren't social distancing, either. But at least they were wearing sneeze guards.

But protesting on the safety of one's living room couch isn't likely to lead to any improvement in policing practices vis a vis people of color. Unfortunately, people wanting to take advantage of legitimate protest to loot and vandalize appear to have been ready and waiting for this moment.

The arson and looting in Minneapolis appears to have been instigated not by the people protesting Floyd's murder but by some white dude in a gas mask, black raincoat and umbrella, who calmly walked up to an AutoZone store, broke several windows, and started to walk away. All the while, he ignored protesters who shouted at him to stop. You've probably seen the video of the whole incident.

It's too bad that nobody unmasked him for the cameras and the real police, like this white guy hammering away at a curb in Washington, D.C. Protesters grabbed and unmasked the man, who was dressed all in black just like the Minneapolis vandal, and carried him to police who happened to be on the other side of the street.

It seems clear that there are some young white males itching to foment violence. Chicago Police arrested a provocateur from Illinois who livestreamed himself vandalizing in Minneapolis, and who invited like-minded droogs to join him.


Thursday night, [28-year-old white male Matthew Lee] Rupert, of Galesburg, Illinois, posted on his public Facebook page an invitation for "goons" to join him in traveling to Minneapolis, where he said he was renting hotel rooms and planned to wreak havoc and "take hella good videos." ...
On Saturday night, Rupert posted to Facebook his plans to return to Chicago and riot there. "(Let me know) who's on board I got cars we got this," he wrote on Facebook, updating later that he would arrive in Chicago in two hours....  Videos show him proclaiming, "Let's start a riot" and "I'm going to start doing some damage," according to the complaint.

Again and again, in city after city, witnesses report that the vandals in Black neighborhoods are often white males, some with out-of-state license plates (or none at all). At the very least, some of them seem to have difficulty finding their way back to the freeway.

On the other hand, someone identifying himself as the President of the United States says they're all left-wing antifa terrorists, so whom can you believe?
Posted by Paul Berge at 3:06 AM