Q Toon: Have It Your Way 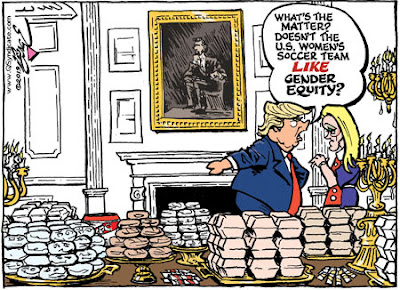 Congratulations to the U.S. Women's Soccer Team for winning the 2019 World Cup!

It has been customary for the the President to invite championship sports teams to the White House. The current occupant of the office, in his infinite folly, has taken to treating Superbowl, college football, and World Series victors to vittles from fast food joints.

Team star Megan Rapinoe announced at the outset of this year's games that she had no intention of accepting any invitation from the Trump White House. Now that the women's team has powered to victory over the rest of the world, no such invitation has been forthcoming, in spite of Mr. Trump's penchant throughout his career for surrounding himself with attractive young women.

Perhaps he will instead invite the men's soccer team, who lost to Mexico 1-0 in the men's final. We know the fast food spread will not include Taco Bell.
Posted by Paul Berge at 6:57 AM