Q Toon: Ain't the Kind of Place to Raise Your Kids 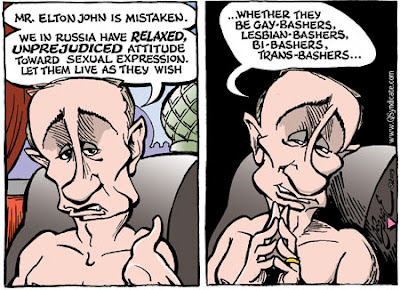 Russian President Vladimir Putin, in an interview with the Financial Times last week, claimed that persistent reports of antigay repression in his country are greatly exaggerated: "We have no problem with LGBT persons. God forbid, let them live as they wish. But some things do appear excessive to us. They claim now that children can play five or six gender roles."

Singer Elton John blasted Putin in a tweet, writing "I strongly disagree with your view that pursuing policies that embrace multicultural and sexual diversity are obsolete in our societies. I find duplicity in your comment that you want LGBT people to 'be happy' and that 'we have no problem in that.'"


"[Elton John] is mistaken," Putin was quoted as saying by the Russian state-run news agency TASS. "We [in Russia] have a very neutral attitude to members of the LGBT community. We have a law, for which we've been slammed, a law banning propaganda of homosexuality among minors."
According to Putin, the law just aims to make sure children are "left alone" until they've grown up, and then they can make decisions regarding their sexuality.

John was particularly upset over scenes cut from his recent biopic, Rocketman, when it was shown in Russia.

Some of those scenes involved depictions of drug use and gay sex, and it's easy to see how those scenes might ruffle the feathers of younger and more sensitive viewers. But the film's distributors also cut a G-rated photo at the end of the movie showing John and his husband with their two sons, and the film was advertised as being restricted to viewers over the age of 18.

Whatever the film distributor did to the film, and whyever they did it, there is plenty of documented evidence of Russian persecution of LGBTQ persons, especially in Chechnya. Elsewhere, LGBTQ Russians have to be wary of  vigilante gangs who attack LGBTQ gathering places or use dating sites to lure them into a mugging.

Since repression of LGBTQ citizens is more important to the Russian government than protecting them, the vigilantes might as well be working with Putin's blessing.

And probably are.
Posted by Paul Berge at 7:00 AM